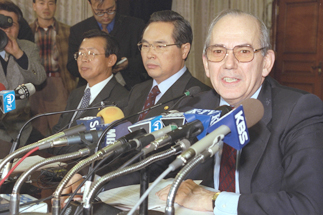 ‘All politics is local” was a favorite phrase of Tip O’Neill, a notably successful politician and speaker of the U.S. House of Representatives. Today, a complementary statement could be “All economics is global.” The international economy regularly provides enormous new challenges to preserving the distinctiveness ― and independence ― of the local community. One consequence is to underscore the importance of looking beyond the locality in an effort to preserve community.
The $11.8-billion deal for the Chicago Mercantile Exchange to acquire the Chicago Board of Trade illustrates the dynamics between location and finance. The principal other bidder, Intercontinental Exchange Inc., based in Atlanta, Georgia, initially made the more attractive financial offer.
But the Merc received a grace period, reflecting in part mutual interest in maintaining local control of the Board of Trade. The two Chicago trading exchanges have been rivals for many years, but individual traders and senior executives also have built very strong personal relationships. The friendship between the chairmen of the Merc and the Board of Trade helped spark the initial discussions about a merger.
Technology also played a role. Legendary Chicago commodities trader Richard Dennis stresses the sophistication of the electronic trading platform of the Merc, an important asset. After intense meetings, the Merc board agreed to increase its offer by 7 percent, enough to secure victory.
July is also the 10th anniversary of Asia’s 1997 financial crisis. The depletion of Thailand’s foreign exchange reserves sparked a meltdown that for a time threatened a global economic collapse.
Financial centers in Hong Kong, Singapore, South Korea, Taiwan and elsewhere in East Asia were hit hard by the crisis, which began in the relatively less-developed economies of Southeast Asia.
The tumultuous commodities industry reflects a more comprehensive technological revolution. Since the early 1970s, changes in telecommunications and transportation have vastly increased global economic integration. The speed and scale in which financial value can be transmitted has grown exponentially.
Chicago commodities exchanges have worked hard to adjust, moving beyond agricultural contracts to include financial futures. Under the executive leadership of Clayton Yeutter and others, the Merc has become a global beacon in such trading. Geographic location was crucial to the initial development of the Chicago exchanges. Technological innovation has been crucial to maintaining Chicago’s eminent role in the new global context. The Merc remains the No. 1 trading center in the world for financial derivatives.
Just as technological change undercuts local economic advantages, regional perspectives are to some extent reinforced. In Kenosha, Wisconsin, county executive Allan Kehl has organized the second “economic summit” on the future of the area.
To a notable degree, technology was featured. The twin themes of the conference were telecommunications and transportation.
The featured speaker was Paul O’Connor, executive director of World Business Chicago, an economic development and analysis organization that integrates business, government and education.
O’Connor’s presentation highlighted regional technology-based commerce to the future growth and strength of Chicago, as well as Kenosha and other surrounding communities. Chicago, far distant from both U.S. coasts, nonetheless is the fifth-largest intermodal container port in the world, after Hong Kong, Singapore, Shanghai and Shenzhen.
Key to this statistic is the regional integration of rail and truck with water transport systems, which requires sophisticated communication and infrastructure support.
Transporting people is another important dimension, with strong regional implications. The migration of firms and jobs from the city to the suburbs has reinforced the importance of a regional perspective. Kenosha, an attractive, relatively low-cost place to live, has enjoyed substantial population growth over the past two decades. A large percentage of the new residents work in the transportation corridor, which runs south to Chicago. The largest employer in Kenosha is Abbott Labs, just over the border in north Chicago. The expansion of commuter rail promises further regional integration, and has meanwhile generated considerable political debate.
Our contemporary global economy drastically reduces the inherent advantages of location. Technology overcomes old requirements for worker proximity and earlier relative advantages. Meanwhile, growing global integration of sophisticated financial markets means that more attention must be paid to effective international regulation, including the development and enforcement of rules requiring transparency in the public reporting of financial transactions. The economy of South Korea, in particular, is much stronger than a decade ago. The lingering specter of the 1997 crash, however, provides a necessary warning.

*The writer is director of the Clausen Center for World Business at Carthage College in Kenosha, Wisconsin. acyr@carthage.edu