At 84, sax man is Jongno fixture

At 84, sax man is Jongno fixture

When dusk falls, a gentleman in a black top hat, patent leather high- heeled boots and a well-thumbed tenor saxophone marches on the streets of Jongno, central Seoul. With glittering brooches on his black coat and an artificial sunflower on his chest, the gentleman roams the streets from evening until the heart of night. Rain or shine, summer or winter, the gentleman with the saxophone is always there.
Last Thursday was no exception. There he was Baek Yeon-hwa, 84, prancing his way into Jongno’s Kwangjang Market.
“Hello to you all! I am Baek Yeon-hwa, the street musician,” he cried in a resonant voice that sounded much younger than his age. He greeed the crowd with a military salute and starts to play.
Baek welcomes everyone to hear his free music just don’t call him “old grandpa.” Then the self-proclaimed street musician is happy to play old Korean pop songs for nothing more than the cost of a smile.
His performance may not land him at Carnegie Hall in New York, but it is pleasant enough to entertain a rowdy gang of people eating at snack bars.
Once Baek starts to play his sax, the music mixes with the boisterous hustle and bustle of the market. In short order Baek wins the attention of customers.
Oh In-suk, who has been selling pancakes and soju at the market for 14 years, says, “Baek is like a permanent fixture of the Kwangjang Market now.”
Some of the customers at the market actually wait for Baek’s performance.
Park Hyun-seon, an office worker, is one.
“I know he is always there, and it’s one good reason for me to come here to drink,” says Park.
As Baek plays old-time Korean pop songs, Park and his gang start to clap and sing along.
But not everyone is a fan.
Take Ki Eun-ae, who sells rice cakes at the market.
“After listening to him play the same repertoire for more than 20 years, I am rather tired of him,” Ki says, casting a glance at Baek. “Yet it’s true that he is one reason that customers come to our market.”
His performance is sometimes stopped by people who offer him drinks. Baek gives a salute and says, “Sir, I don’t drink. Instead, I will dance for you.”
Then he performs a few dance steps, reminding his audience that he is a better musician than a dancer. “Here, take this 5,000 won and play me ‘Don’t You Cry, Hong Island,’” cries another customer at a snack stall. “Thank you, sir,” Baek says, and blows his horn. 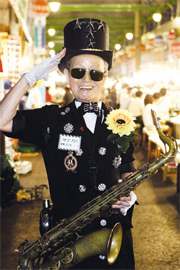 Although he does not play for money, he appreciates donations because he has no fixed income and lives from hand to mouth. Living alone, he stays at affordable motels in Jongno, he says.
It’s not that Baek is a natural musician wasting his talent in this shabby crowded back alley. “I have no great talent,” says Baek, taking a short break after an hour’s performance at the market. “I just love playing music and entertaining people. That’s all,” he says.
Before coming to play, he makes sure he is dressed right. From his hat to his heels, Baek has a year-round stage outfit that helps him look taller than his height of 5-foot-2. His outfit looks fancy at first, but don’t let the sparkling bow tie fool you.
A closer look reveals that it is actually a plastic hair accessory hanging on a hair band. How did he buy the outfit? “I didn’t buy it with money,” he says, smiling. “I went to second-hand stores and played my saxophone for the vendors.” He got the black coat because it hides dirt. On his right chest, he wears a name tag that reads, “Everything in this world is beautiful. Let’s make it full of pretty things.”
Baek has never had a fixed income in his life, ever since he left his hometown of Hamyang, South Gyeongsang to join a traveling circus and drama troupe. “I don’t know why, but I just couldn’t help it,” says Baek. “I had to travel around, sing songs and be on stage.”
First he joined the Haetnim Gukgeukdan, a traveling drama troupe, where he started from scratch by cleaning and setting up the tent for the stage. “I was especially good at playing flute,” Baek recalls.
After decades of traveling the country, he settled in Seoul and started to play saxophone in Jongno in the 1970s. Baek Yeon-hwa is his stage name ― his real name is Lee Ho-yeong. Yet he has lived his life as Baek Yeon-hwa, the street actor and musician.
His real name sounds foreign to him now, after decades of refusing to see his family in his hometown.
“To my family, I am just a jerk,” Baek says, his voice trembling.
His mood soon brightens when he explains that his saxophone was made in France with empty cartridges from World War II.
With his strong stage presence, Baek has made himself into a local celebrity in the Jongno area, and sometimes performs at birthday parties for the elderly.
His performances are free, but customers donate money for the appearance, which is the way he earns a living.
It is never sufficient, but he says, “I am not hungry now and I have a roof over me tonight. What more do you want? I have no house. I have no tax bills to pay. I have nothing. And that makes me the most comfortable human being on Earth.” 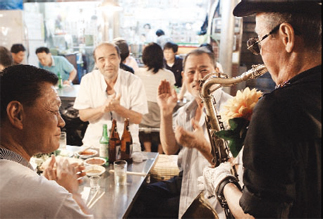 Plays his saxophone at the Kwangjang Market in Jongno. Despite not having a home, Baek says he is “the most comfortable human being on Earth.” Photos by Ahn Yoon-soo

He may be estranged from his own biological family, but he has about 10 “sons,” who are actually homeless people in the Jongno area.
“They ask me for money to buy 650-won noodles, and I don’t give them more than that, because otherwise, they will spend the money buying soju,” Baek says.
“There are just too many people in this world who have no food and no roof.”
These days, his datebook is filled with gigs at birthday parties and welfare centers. Furthermore, he recently was featured in a music video for the singer Park Ji-yun.
Baek also was invited to star in a 45-second trailer for the Puchon International Fantastic Film Festival, which ended last week.

Lee So-young, co-director for the trailer, cast Baek.
“Baek is a person who lives on the borderline between fantasy and reality,” Lee said. “Just look at him, and it’s easy to understand that he symbolizes the fantasy of freedom that we all dream about.”
Baek has no regrets about his life.
“In Aesop’s fable of the ant and the grasshopper, I have always been the grasshopper,” Baek says.
“People say that we should all pursue the life of the ant. But you know, it’s not so bad to be a grasshopper.”
What is his dream?
With a faraway look in his eyes he says, “To see the development of my precious country, the Republic of Korea,” he says, as if reciting lines from a soliloquy.
Asked the same question again, Baek smiles and says, “Playing the saxophone until the day I die.”