He’s a dentist, he likes Barry Manilow and he plays punk

He’s a dentist, he likes Barry Manilow and he plays punk 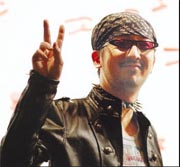 Among the five members, Peck Seung-yup, the leader, seems closest to being a punk rocker. During the interview, he wore a black t-shirt that said, “You Caught Me At A Bad Time, I’m Awake.” His spiky belt, white-framed glasses, thick silver necklace and pink hat reflected the genre.
Surprisingly, Peck likes all types of music. He picked four different albums that most influenced his career.
Peck’s first choice is “String Sextet No. 1” by Johannes Brahms, a German composer of the Romantic period.
“There is absolute sorrow in this piece,” said Peck, “Yet there is a ray of hope.” Peck says Brahms soothes him whenever he experiences emotional stress. American singer-song writer Barry Manilow is Peck’s second choice. In 1988, Bob Dylan said to Manilow at a party, “Don’t stop what you’re doing, man. We’re all inspired by you.”
Peck was definitely inspired as well ― to propose to his wife. He said that when the two dated, they often listened to Manilow’s “Paradise Cafe” while driving in the moonlight. “This song is perfect for a rainy day, too,” he said.
“Concerto Grosson No. 2- 1” by the New Trolls, an Italian progressive rock band, is Peck’s third choice.
“When I have to choose between classical and popular music, this concerto is the answer,” he said. (The New Trolls are known for mixing rock and classical.)
Lastly, Peck mentioned the Korean rock group, DeulGukHwa, meaning “wild chrysanthemum.” The group released its first album “March” in 1985, introducing rock to Korea.
“DeulGukHwa is an idol for my generation,” said Peck. He added that the group influenced students to form rockbands. “They were my first encounter with rock,” Peck said.