[TALK OF THE TOWN]Frugal guy gets his Ms. Scrooge

[TALK OF THE TOWN]Frugal guy gets his Ms. Scrooge 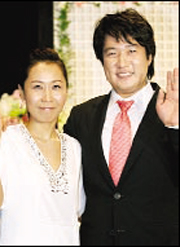 It’s a classic case of the platonic friendship that evolved into “something more.” Comedian Chung Sun-hui and fellow celebrity Ahn Jae-hwan abruptly announced their wedding plans, just two days after confirming rumors that they were dating.
The two 34-year-old became fast friends after Ahn appeared as a guest on a KBS radio program hosted by Chung. They began dating in February.
The lovebirds are notorious for their Scrooge-like tendencies. While starring in “Manwone Haengbok,” (“Happiness with 10,000 won”), a show that restricts competitors to roughly ten U.S. dollars spending money per week, Ahn earned acclaim by spending a measly 350 won. His expenditures totaled the least amount of money spent in the history of the program. Likewise, Chung shocked fellow celebrities after revealing that shortly after her debut in 1991, she used to save on bus fare by walking to and from her home and the broadcast station in Yeouido.
Ahn, a graduate of Seoul National University, is an actor with several successful business ventures, including a bar in Samseong-dong. Chung is a regular on Korean variety shows such as “Happy Sunday.” They plan to exchange vows in November. By Renee Park