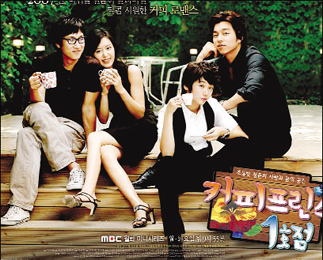 Take three characters: First, a doctor who needs medical care after working too many night shifts. Second, an overworked office worker who recites “C’est la vie” 10 times a day because of her boss, whom she thinks might be a cockroach she stepped on in her former life. Third, a mother who is torn between love and hatred for her 9-month-old baby who cries all the time.
There are two things these three modern penitents have in common, despite their different environments and circumstances: One, they are my dearest friends in the world and two, their raison d’etre these days is watching “Coffee Prince No. 1 Branch” on MBC-TV every Monday and Tuesday night.
Like my friends, I am also a devotee of this drama. My biggest complaint in life is that I am missing the latest episode because I need to write this column by deadline. Not that I need worry ― I’m sure there will be girls chit-chatting about the latest episode in the subway. I often get the urge to start conversations with strangers on the subway with lines like “Eun-chan finally kissed Han-gyeol last night,” especially with those who are complaining about missing the latest episode.
I have reasons to be proud, as I desperately defend my right to watch this drama. I recently grabbed a nook in the smoking lounge of my office building in order to be near a television. Not wanting to miss a minute, I built a temporary nest and changed the channel from the news, resisting the stares of the middle-aged smokers in the room. I have to confess that I almost screamed when the two main characters of Coffee Prince, Eun-chan and Han-gyeol, exchanged a kiss. The stares from my coworkers and the thick smoke in the room were the last things I cared about.
Now, let me introduce Eun-chan, a young woman with boyish charm. She has to play the father figure at home and works from dawn to dusk to bring home thick, fat bacon. She runs into Han-gyeol, who was born into a family with money to burn and good looks. He thinks Eun-chan is a man and asks her to work in his new cafe, The Coffee Prince, where all employees belong to the sterner sex. They fall for each other, which leads to a love triangle featuring Yu-ju, an artist whom Han-gyeol has secretly admired for a long time and Han-seong, Yu-ju’s boyfriend and Han-gyeol’s cousin. This sounds twisted and complicated, but it has charm. Indeed, a girl disguised as a boy has long been the subject matter of girlie romance. The actress Yun Eun-hye deserves credit for her performance in the lead role. Another irresistible lure of the drama is the feast of male characters, from the owner of the cafe to the waiters.
Producer Lee Yun-jeong is a woman, as aficionados of Coffee Prince presumed, given directing style and storytelling, which are perfect for the female palate. Lee just knows how to attract women viewers, with skillful juggling of comedy, romance and drama.
My friends and the strangers I run across on the subway are not the only ones who have surrendered to the show. It has scored an impressive audience rating that is rushing toward the 30 percent mark.
The show is far from being Nobel prize-worthy but it offers a sugar candy kind of attraction to viewers who need a hypnotic moment to escape from their long days.
It is a great pity that I missed the Coffee Prince today, but I have these friends who can share the saccharin charm of the drama to dilute the bitterness of living. The world needs a little diversity, and this kind of silly, sweet much ado about romance won’t do any harm.
Dying to know if Han-gyeol kissed Eun-chan back tonight, I just can’t wait for the subway ride tomorrow with my fellow Coffee Prince enthusiasts. Or, I can ask my stressed-out friends who make it their business not to miss their dose of “Coffee Prince.”