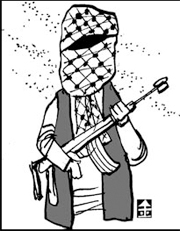 When the Taliban ruled Afghanistan from 1996 to 2001 the religious police had great authority. Their main job was to regulate behavior that broke the Taliban’s version of Muslim rules.
The reason they called themselves Taliban is because their interpretation of these rules is very different from other Muslims. All men are supposed to grow beards and women must wear burka covering their faces. TV programs, sports games, concerts, photography, music and dance were strictly forbidden. In stadiums where sports had previously been enjoyed, people who violated Taliban rules were executed in public by the religious police.
Persecution of other religions was harsh. Hindus were ordered to wear a yellow badge on their chests that was the size of a thumb. The Taliban said the badges were designed to prevent Hindus being attacked when the religious police looked for people who did not worship in the Muslim temples, but this kind of discrimination is hard to bear. It is similar to the way the Nazis made the Jews wear a Star of David.
The demolition of the Bamiyan Buddha statues in March 2000 was another low point in the Taliban’s oppression. The huge Buddhist statues on the Silk Road had offered a peaceful smile to travelers from East and West for over 2,000 years but they were blasted to dust in just a few seconds.
To the Taliban the statues, a cultural property of the world representing Gandhara art, were just a graven image that offended their Islamic sensibilities.
All of these barbarisms were undertaken in the name of laws and rules that swept away people and priceless artifacts.
In 2001, surprisingly, among the people captured by American soldiers searching in Afghanistan for the perpetrators of the 9/11 attacks there was a white middle class man from California. He said, “I became a Taliban warrior in Afghanistan because that is where the sharia (Islamic law) is practiced properly.
Religions that begin in a spirit of reconciliation can result in Talibans when interpreted in the wrong way. The Christians who went to Afghanistan thought it was their duty to spread their religion.
However, many people there are Taliban, who follow the rules of Islam more strictly than any other Muslims. It is not hard to predict what kind of reaction they will have when told “We have come to save your souls.” The Economist described this case as the “clash of two groups doing god’s duty.”
It is more difficult to resolve the clash between these two groups than to negotiate the release of the hostages.

The writer is the Tokyo correspondent of the JoongAng Ilbo.
[yyjune@joongang.co.kr]