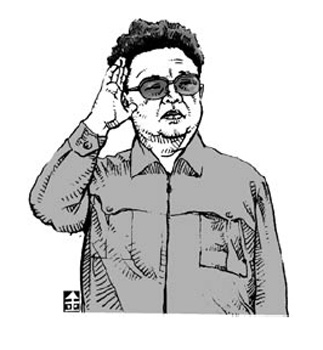 The Jin Dynasty told the Song Dynasty of China that it would only negotiate after the Song Dynasty purged its war-hawk general, Yue Fei. Jin Hui, a leader of peace advocates, then charged Yue Fei with rebellion and executed him. As a result of the Treaty of Shaoxing in the 12th century, emperors of Song had to be appointed by and pay tribute to the Jin Dynasty.
Lately North Korea has acted as pompously as the Jin Dynasty. It now blatantly intervenes in South Korean elections. As the presidential election nears, the North rants that South Korea should fight hard to keep the Grand National Party from seizing power.
Last year, a weekly North Korea journal called “Unification News” argued that major politicians of both the liberal and conservative parties of South Korea have believed they could only win the presidential election by getting an audience with the Dear Leader Kim Jong Il, and that it has been true ever since the Inter-Korean Joint Declaration in 2000. The journal claims Kim chooses the president of South Korea. South Korean politicians deserve that humiliation based on the way they’ve behaved.
The explosive power of North Korea is indeed tremendous. The terrorist bombing of a Korean Airlines plane occurred 17 days before the presidential election in 1987; the Chosun Labor Party plot, the largest such plot ever disclosed, was announced to have been discovered two months before the 1992 presidential election. These two events determined the outcome of the elections. Also in 1996, five days before the April 11 general election, North Korea conducted a military campaign for three days in the Joint Security Area of Panmunjeom, which led to a sweeping victory by the then-ruling “New Korea Party.”
North Korea’s intervention has also sometimes backfired. In 2002, three days before the April 13 general election, Kim Dae-jung’s henchman, Park Jie-won, hurriedly announced that both Koreas had agreed to a joint summit meeting. However, contrary to expectations, the election turned out to be a big loss for the ruling party. That’s because people have gotten smarter.
North Korea’s attitude and South Korea’s response have also both changed. The presidential hopefuls of the progressive parties no longer feel like they need to get support from North Korea. North Korea is more manifestly interfering as well, deciding the time and place of the inter-Korean summit at its whim. It seems pretty obvious what both Pyongyang and the Blue House want. Yet nobody can say how the voters will respond.