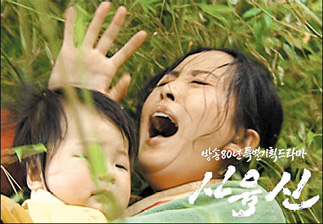 “Sayuksin,” the first inter-Korean TV drama, is now airing in the South. [KBS-TV]

As a South Korean with a North Korean heritage I grew up listening to my grandparents from the North speaking with strong Hamgyeong accents, which sounded like a foreign language. Their accents used to grow stronger during family lunches in a restaurant that served cold noodles, their regional speciality. As a very South Korean kid sitting with my emphatically North Korean grandparents, I felt a sense of isolation that is still vivid.
Now I have grown up and learned to enjoy noodles with pieces of fermented skate, which was their favorite. Sadly they are no longer with me. They died before realizing their dream of revisiting their hometown. Their absence was even more sorely missed last week when I watched the debut of “Sayuksin,” the first TV drama produced by inter-Korean collaboration.
Airing Wednesdays and Thursdays at 10 p.m., the drama dates back to the 15th century and the Joseon Dynasty. It tells the story of six faithful retainers who plot the return of their young king, Danjong, who was dethroned by an ambitious uncle, Prince Suyang. Their plan fails and the retainers are killed. The subject matter has been used to make hits before but the fact that it is an inter-Korean production makes it all the more intriguing.
Using a North Korean cast and crew, the drama was planned and bankrolled by KBS-TV. Kim Ki-choon, a KBS-TV official, masterminded the production. He said it cost 2 billion won ($2.1 million) to make and one year of production. The North Koreans came up with the first draft of the script and they worked together with South Koreans on revision. Kim said that KBS-TV also provided digital broadcasting technology and other filming skills to North’s Korea Central TV, its coproducer.
The drama was supposed to debut last autumn but it was postponed due to Pyongyang’s nuclear test. This year’s debut looks more auspicious, with an inter-Korean summit planned for later this month.
“We came up with the idea of producing a drama that would help restore the ethnic identities that have been lost in modern times,” Kim said. “Before the war, the language and culture of the two Koreas was similar, which is one message of the drama.” Kim said that he has information that Kim Jong-il has shown an interest in the film. Kim Ki-choon said the drama will soon be aired in the North.
So far the South Korean audience has given the drama a lukewarm response. The first episode won a 7 percent share of the available audience, and that figure fell to 5 percent the next day. The presence of North Korean dancer Jo Myeong-ae, who has built a fan base in the South with commercial appearances, did little to help.
Perhaps because of the South Korean involvement, the North Korean cast does not appear very North Korean. I hoped for some accents like my grandparents’, but the drama’s North Koreans came off as too middle-Korean. There were stirring lines, like “I will devote myself by grinding my bones and smashing my body,” uttered by one of the king’s retainers, but in a relatively neutral accent.
From the costumes to the camera movements, the drama offers a surprising level of sophistication. A war sequence (featuring a Korean prince routing the Japanese enemy) from the first episode had impressive handheld camera movements.
Another memorable scene was the confrontation between the two male protagonists in the latest episode, where the camera kept panning around the two in close-up to enhance the feeling of tension. However, there was not enough of the crude charm that is a signature of North Korean entertainment, from the strong accents to their limited used of technology. I wonder how my grandparents would have reacted to this production.
For myself, I ended up with a craving for cold-noodles and fermented skate surrounded by diners with strong North Korean accents.