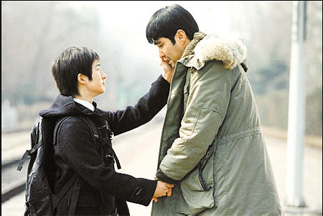 In a bid to describe the world of film director Jang Jin film critics have coined a new phrase ― “Jang Jin-ish.” This seems an appropriate choice, given that Jang’s signature style includes comic twists, sharp puns and stagy presentation. Jang’s films do not sell millions of tickets but he has nurtured a faithful fan base that appreciates his “Jang Jin-ish” style.
In recent years, the director has pursued a variety of genres from romances such as “Someone Special” (2004) and “Righteous Ties” (2006).
His latest work, “My Son” is a venture into human drama.
The premise of My Son is rather too simple for a Jang Jin film: A man serving life in prison gets the chance to meet his son after 15 years ― for one day. Many Jang fans wondered how he would make this into a 103-minute film and now English-speaking viewers can find out as a subtitled-DVD was recently released.
First, Jang introduces the protagonist, Kang-sik, a 39-year-old who was sentenced to life for robbery and murder. Jang describes Kang-sik as docile and religious, having repented his unwise past.
Jang gives us a chronological presentation of Kang’s highly anticipated one-day outing but he does not make the story too serious or dark, mixing jokes and comical elements in between.
For example, Jang injects comedy into a scene where Kang-sik practices how to greet his son by saying “Hi, yo yo.”
The days of training, however, are in vain, as awkwardness prevails when he actually faces his son. Joon-suk asks blunt questions like “Do you remember the face of your victims?” and Kang-sik is heartbroken.
However, as time goes by father and son begin to break the 15-year-old ice by building bonds in a public bath house and running around town like crazy.
The morning after the father and son bid a painful good-bye, but there is a big twist at the end.
The film has good Jang Jin elements, such as a scene where Kang-sik suddenly faces the camera and says, “You heard that too, right? He called me a ‘father.’”
Another memorable scene is at the public bathhouse where Jang presents some fantasy factors. As the father and son rebuild their ties, Jang changes the bathhouse into a seabed as a way to express Kang-sik’s joy.
This film, however, is not likely to be seen as Jang’s best. It relies too heavily on narration by the main characters and many of the soliloquies are either bland or didactic or both.
In one scene Kang-sik says, “This is sad. This hurts. I hate it that my eyes seem to scare my son,” but his speech is too obvious. Jang did not need to tell viewers what to feel.
Narration has been one of Jang’s favorite tools in his past films, but he used them only when necessary and they were funny and sharp.
The narrations in My Son seem to block the film’s flow. Several notable Jang Jin elements are lost in the narrations at the end.
The actors supply a good performance, especially Ryu Deok-hwan, who plays the son.
This young actor is impressive and he fits smoothly into his character.
Meanwhile, Cha Seung-won, the lead actor, made a notable move with this film as his strength hiterhto has been comedies. Watching him play a docile character, viewers feel he is trying hard, but this is not his best performance.
The English subtitles are passable, given Jang’s generous use of Korean puns makes a full translation difficult.
For those eager to explore the “Jang Jin-ish” world My Son may not be the best first choice.