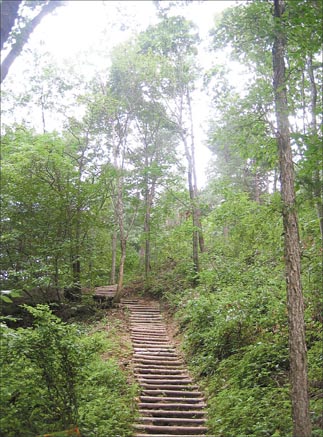 A forest trail on Mount Cheongtae.

DUNNAE, Gangwon ― On Mount Cheongtae, sitting atop a mossy rock in a grove of pine trees is an experience fit for a king.
And that was exactly what King Taejo did more than six centuries ago after founding the Joseon Dynasty.
After achieving his ambition of establishing a new kingdom, King Taejo made a series of trips to pay homage to his ancestors’ graves and made a brief stop at the mountain en route. The head of the village suggested a mossy rock in the thick forest as the right place for the royal presence and offered him lunch there. A mossy rock may not sound too inviting, but the king was obviously impressed by the scenic view.
After the meal, the king asked for a brush, ink and paper and wrote two Chinese characters, “cheong” and “tae,” meaning “green” and “great.” He then gave the paper and the name to the villagers. And thus their mountain became known as Cheongtae. 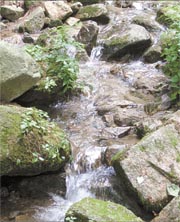 Last Sunday, many plebeians were feeling the same as the ancient king as they sat on Cheongtae’s mossy rocks and enjoyed the shafts of sunlight that pierced the thick green canopy of the pine grove.
The mountain is about 1,200 meters (3,937 feet) above sea level, and its upper mid-slopes boast around 402 hectares of pine trees, big cone pines and various kinds of broad-leaved trees.
The government designated the grove as a “national forest for rest” in 1993. The two-hour drive from Seoul provides enough time to get the skycrapers of the urban forest out of one’s mind in preparation for the sweet scents and sounds Cheongtae’s pine forest.
There are 34 government-designated national forests, says Kim Yeong-hoon, an official with the Mount Cheongtae forest management office.
“This is an exhibition place for the national forests,” said Kim, who takes special pride in Cheongtae. “We have greeted many foreign forestry ministers on their tours of Korean forests.”
The Korea National Tourism Organization also recommends Cheongtae as a good place to visit in August when an escape from the scorching heat of the city becomes almost mandatory.
Kim gets perplexed by requests to point out the exact rock that provided King Taejo his temporary throne. 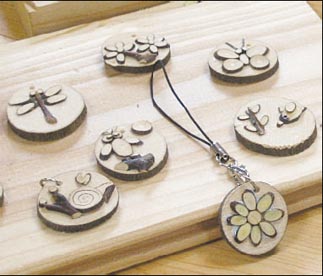 Cell phone accessories made by visitors

He regains his composure and pride by telling everybody that all the rocks in the forest can provide a regal perch for exhausted visitors.
A stroll through the forest proves Kim right. From the entrance, the air gets velvety, cool and pleasantly moist, with the scent of grass and trees.
It is a different kind of refreshment from the aggressive cooling provided by urban air-conditioning. The weather forecast had mentioned the possibility of a blistering heat wave, but the forest has a natural immunity to such a phenomenon.
The sky was obscured by various types of leaves that created a dappled light, turning the extreme heat of midday into a benign and soporific warmth.
All was quiet except for birds chirping, water flowing through a nearby valley and breezes gently swaying the branches.
The stroll, which Koreans call “a therapeutic bath in the air of the forest,” is an easy journey, as there are trails cut through the trees. After a leisurely walk along a trail for about two hours, I found my mossy rock at a valley, sat there and dipped my bare feet into the water. It was crystal clear and ice-cold. I had to pull my feet out within a few seconds for fear of getting frostbite ― that’s not an anxiety I had hitherto experienced in the middle of August.
Along the way, I could see fellow visitors, quietly reading or taking a nap amid thick trees as squirrels scurried through branches. Many visitors brought lunch boxes and mats, a good way to enjoy the forest which has no restaurants inside. If you are a hiking enthusiast who cannot get a big enough fix by just walking through the forest, there is a two-hour course to the top of Mount Cheongtae, which directly connects to various points on the forest trail. 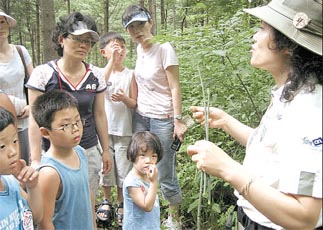 Park Ae-jung describing the plant life of the forest

But be cautious, the park does post information that there can be many wild animals like deer and boars. Confronting wild boars was not my of a restful weekend getaway, so I chose to stay in the forest.
Park Ae-jung, who runs a tour of the forest and its ecology and plant life, recommends walking from 10 a.m. to 2 p.m. She says this is when the trees discharge the most phytoncide which helps to protect against harmful germs. The element is believed to be good for humans, Park says, especially for the heart and lungs.
“Breathe in as much air as you can in the forest,” Park recommends. She points out that the forest park sits 740 meters above sea level, which many believe is the ideal elevation for human beings.
Park and her fellow guides offer a 90-minute tour of the forest at 1 p.m. and 2:30 p.m. It’s free and departs from the Forest Experience Center.
The tour offers explanations of the plant life in the mountains, which is a great attraction for children. Kwon Jae-min, a nine-year-old from Pyeongtaek, Gyeonggi Province, was especially eager to hear about a plant called cheonnamseong, which was used in the Joseon Dynasty to make a poison that was used to kill criminals who had been sentenced to death.
The Forest Experience Center offers other attractions for children like Kwon, such as simple woodcraft sessions, which teach them how to make cell phone accessories from wood and T-shirts dyed with yellow mud.
When dusk fell, it was time to hit the cabin, another attraction of the forest park. There are 40 rooms available with prices that range from 55,000 won ($58) to 98,000 won during July and August. I was lucky to get the last available room at the cabin. There are private places around the mountain, and many of them offer rooms of the same size at double the price. Availability can be checked at the Web site, www.huyang.go.kr. A reservation through the same Web site is a must during the peak summer months.
In front of the cabins, there is an open space with barbecue grills for the use of visitors. The rooms come with basic kitchen utensils, and visitors can just bring meat and vegetables to cook. You also need to bring charcoal, which is easily available at the town’s supermarkets.

Barbecue seems to be a particularly suitable choice for Cheongtae, as Hoengseong county is noted for its Korean beef.
A10-minute drive takes visitors to the Dunnae village, which has a number of butchers’ shops that specialize in Hoengseong County beef.
One of the owners, who was too shy to give her name, offers 600 grams of quality sirloin at 42,000 won.
Too expensive, I claimed, but she growled at my complaint, saying that her beef costs only about half the price found at Seoul’s department stores.
My ambitious purchase of beef, however, turned out to be a disappointment as it all got burned, but the idea of barbecue amid the forest remains a craving.
My computer screensaver is now a picture of a pine grove from Cheongtae and I find myself checking the calendar for the next time I can visit the king’s mountain.


Mount Cheongtae is best reached by car. You can also get there by taking a bus from the East Seoul Bus Terminal to Wonju, Gangwon. Transfer there to a bus for Dunnae village.
The total journey takes about two-and-a-half hours. The buses to Wonju leave the East Seoul Bus Terminal every 10 minutes from 6:10 a.m. to 9 p.m.
From Dunnae Bus Terminal, take a taxi to the forest, which will cost 8,000 won ($9). There is a taxi stop right next to the bus terminal.
However, there are no shuttle buses inside the 402-hectare forest, which is why it is best to travel by car.
From Seoul, take the Yeongdong Highway to the Dunnae Interchange and then drive for about 15 minutes to get to the forest.
For reservations and further information, visit the Web site, www.huyang.go.kr.