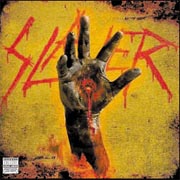 The U.S. thrash metal band Slayer has been around for so long that when they released their debut “Show No Mercy” in 1983, Michael Jackson was a star. Today, Jackson is a has-been, but Slayer keep on rocking. Dave Lombardo, the band’s original drummer, whose feet move faster than a mailman running from a dog, has rejoined Slayer after leaving the band in 1990 to form Grip Inc.
Slayer’s latest effort is “Christ Illusion.” The album is like the band’s career so far. It starts with a bang (the opener, “Flesh Storm”), peaks early (next two tracks, “Catalyst” and “Skeleton Christ”), and then fades away.
The return of Lombardo might be the selling point for the band, but guitarist Kerry King is the real gem here. His down-stroke picking on “Catalyst,” sharp riffs on “Jihad,” and the blazing solo on “Cult” prove he is the premier guitar player in today’s thrash metal scene. A word of warning: The lyrics to “Jihad” are in poor taste even by Slayer’s standards.
By Yoo Jee-ho