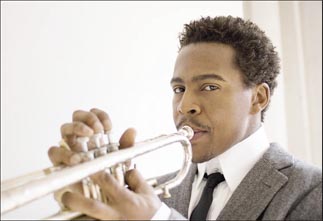 Jazz prodigy Roy Hargrove will be in Seoul next week. [JoongAng Ilbo]

When the great trumpeter Wynton Marsalis notices you in high school, you must have been doing something right.
But being discovered is one thing. Capitalizing on that break is quite another, and many young musicians just flicker and fade away.
For the prodigy Roy Hargrove, the fortuitous meeting with Marsalis at a Dallas high school led to playing opportunities with major names like saxophonists Bobby Watson and Ricky Ford, and drummer Carl Allen.
Hargrove turned these chances into a career of critical acclaim and international success that includes two Grammy Awards.
Hargrove, now 37, is one of the brightest stars in the jazz scene. He takes his quintet to the stage at Seoul’s LG Arts Center on Sept. 3. This is the Texan’s second visit to Korea: In 2002, he was joined by Herbie Hancock (piano), the late Michael Brecker (saxophone), and John Patitucci (bass) in Seoul.
Accompanying him this year are: Gerald Claton on piano, Joseph Sanders on bass, Justin Robinson at alto saxophone, and Montez Coleman on drums.
Hargrove is an aggressive and versatile player. Over a recording career that spans 17 years, Hargrove has dabbled in straight-ahead jazz, hip hop, Latin jazz, and contemporary funk. He has won Grammys for two vastly different styles: In 1997, his Cuban-based band Crisol took home the Best Latin Jazz Performance Grammy for the album “Habana,” and then in 2002, Hargrove, Hancock and Brecker won the Best Instrumental Jazz Album category with “Directions in Music,” a standard jazz record.
Hargrove has performed with artists in various genres, from traditional jazz musicians Hancock and Sonny Rollins to R&B singer Erykah Badu, soul artist D’Angelo and rapper Q-Tip.
His latest efforts are further evidence to the range of his musical diversity. In May 2006, Verve Records simultaneously released “Nothing Serious,” a straight-ahead jazz performance by The Roy Hargrove Quintet, and “Distractions,” by Hargrove’s neo soul/jazz fusion outfit The RH Factor.
Tickets run from 30,000 won to 70,000 won. The performance starts at 8 p.m. on Sept. 3 at LG Arts Center. For more information, call (02) 2005-0114.