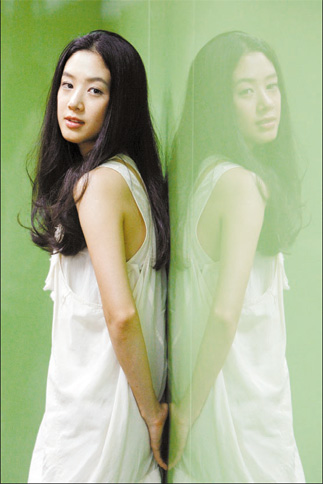 One of the privileges of being an actor is the opportunity to play various character roles. Apart from an actor’s real self, there is also her on-screen persona. Actress Jung Ryeo-won, 26, lives out many roles every day.
Her latest is in the upcoming film “Two Faces of My Girlfriend,” directed by Lee Seok-hun. Jung plays the main character who has multiple personality disorder rooted in a past love affair.
The character has two names: Ani and Hani. Though their names sound alike, the two are opposites in temperament.
Ani is charming, fragile and popular with men. Hani, on the other hand, uses abusive language without reserve, drinks boilermakers and occasionally, violently lashes out at others.
Ani/Hani’s boyfriend Goo-chang, played by Bong Tae-gyu, loves her. Even so, he finds her inconsistent personality hard to embrace.
While playing dual roles was a challenge, Jung acts with passion. The film will be released next month.
“It was my first time acting out two different roles in one story,” Jung said. “At first, I refused the part because it seemed too tough.” Later, she realized that if she did not take the role, she would regret it, she added.
“Buying a house with your pocket money is nearly impossible,” said Jung. “You must make other moves to supplement the shortage of funds by amassing other resources.”
Likewise, in addition to using her natural talent, Jung sought advice from her peers and thoroughly studied the characters. “At the end of the piece, I felt like a rich person who had just bought a big house,” Jung said.
But completing her work would have been impossible without the help of her on-screen partner, Bong.
“Bong had a vivid acting plan,” Jung said. “He was so absorbed in the character.” She complimented her costar’s know-how and experience in acting.
“I was a crow walking behind the stork,” Jung said. “He was ahead of me, encouraging me and leading me to our final destination.”
In terms of the two characters Ani and Hani, Jung says she is more similar to Hani in terms of her easygoing and straightforward character.
“At first, I thought it would be easier to act out Hani,” she said, but she soon found the role rather difficult.
The Hani character resided deep within Jung’s heart, which made bringing out emotions difficult.
“The public frowned when they saw me act as Hani,” Jung said. “They said I was awkward as her.”
To overcome this impediment, Jung’s colleagues helped her bring out her emotions more effectively.
While that suggestion helped, she still faced limits due to low self-confidence.
“That’s when I realized that my efforts and willingness help me overcome hardships,” Jung said.
After gaining confidence, she was able to focus more on the film. She eagerly reviewed case studies of patients with multiple personality disorder through documentaries and television programs.
“I was terrified to see those with the disorder,” Jung said. “I was very careful when acting because I didn’t want to hurt the real patients and their families.”
“Though Hani was described as overly aggressive and out of her mind in the original script, I tried not to overact,” she said, expressing her desire to balance the role.
While deeply absorbed in acting, Jung sometimes had trouble returning to reality after shooting ended.
“Everything is about maintaining balance,” said Jung. “I should act with passion when the shooting lights are on but when they are off, it’s over.
“There was a scene where I had to scream and cry,” Jung said. “I felt alive ― I normally can’t reach this feeling onstage.”
Jung was originally a member of the Korean female dance group Shakra. While in the group, she appeared in a morning soap opera and gradually developed her acting career. Now, Jung enjoys giving advice to her friends. Perhaps this is why she completed her mission in acting out Ani and Hani.
“Being in someone else’s shoes is very important,” Jung said. “But no matter how much you counsel others, the answers to all your troubles lie within you.”