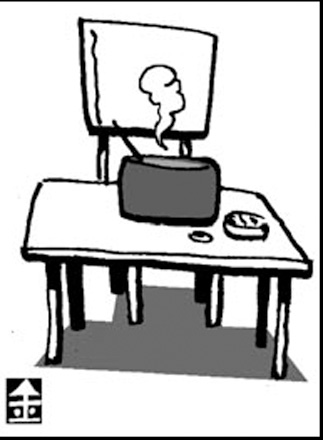 Eating alone in a restaurant may look depressing. Some people, particularly single women, would rather skip the meal altogether than eat alone. Restaurant owners don’t welcome single customers, either. More than a few greasy-spoon cafes won’t give a menu to just one person. What is more, some ruthless restaurants kick out single customers who come during the crowded lunchtime, on the grounds that one customer would occupy a table for four.
In Japan, where the singles population has increased faster than in Korea, you frequently see people eating out alone. There is even a term for single dining, “go-sik” in Korean. Korea has also seen an increase in the number of people who eat alone, as the number of singles living alone has reached 3 million. Besides eating out alone, singles with freedom and thick wallets travel overseas, buy designer goods and see musicals. The purchasing power of singles makes them an important consumer group, at which marketing is targeted. Young singles are also envied as a “splendid single” or a “gold miss,” not “old miss.”
It has only been since the modern age that people living without a partner were seen as normal. Augustus, emperor of the ancient Roman Empire, did not hesitate to assert that foregoing the duty to procreate is as severe a crime as murder. Rome, at that time, considered people who didn’t help increase the population to be sinners. They not only imposed taxes on single people, but also denied the right to inheritance for single childless females over the age of 50. Taxes on singles were revived in 18th century France, after the French Revolution. French Canada also implemented a bizarre law that if a man did not marry by the age of 20 and a woman by the age of 16 their parents were subject to a severe tax penalty. Until the Industrial Revolution, singles were considered the same as prodigals and the mentally disabled.
Due to tax reforms, the gap of the net amount of income tax between single taxpayers and married taxpayers has become wider. Suppose both a single worker and a married worker with four children earned 30 million won per year, or $30,000. The former has to pay more than twice the net amount of taxes paid by the latter. The law intends to promote marriage and childbirths, which reminds us of the ancient Roman taxation on singles.
One may well wonder, however, whether that can reverse the unrelenting trend of a society that encourages the single life.
“Divorce is not a failure of a life but a choice toward freedom,” said Jacques Attali, a French futurist who predicted the end of the marriage system.