Previews that educate concert fans prove to be big hit

Previews that educate concert fans prove to be big hit 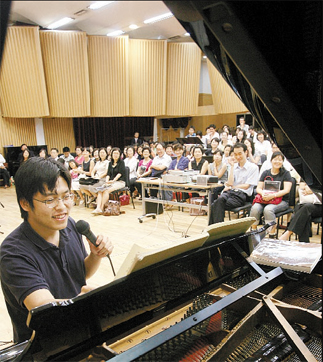 “This is the first movement of this concerto. Here, the music sounds like Brahms is dreaming.”
On Aug. 13, Kim Sun-wook, 19, who won first prize in the Leeds International Pianoforte Competition, gave a lecture in the practice room of the Seoul Philharmonic Orchestra.
The lecture was a preview session for the next day’s concert. A free concert featuring Kim’s performance was held on Aug. 14 at the hall, where he was to play Brahms’s Piano Concerto No. 1. This was the piece that earned him first prize. Later, he completed three more concerts with the Seoul Philharmonic Orchestra under the direction of Jung Myong-hoon.
“Brahms composed this music when he was about my age,” Kim said. “I chose this musical piece because it would be easy to express the feelings ― the feelings of a young musician like me.”
The guests seemed quite absorbed in his fine explanation. Music critic Jin Hoe-suk followed Kim Sun-wook and elaborated on the performance DVD. All together, the preview session lasted three hours.
Preview programs, where artists give explanations for their upcoming concert, are catching on.
In a preview musicians or music critics give lectures to increase the audience’s understanding. Preview programs are different from in-concert interpretation.
Preview sessions prove their popularity each time they are held.
Last March, for example, an open class for St. Matthem Passion was arranged 10 days before the actual concert. In a preview for Tamas Vasary’s concert, Park Je-seong, music columnist, lectured on Chopin.
The Seoul Philharmonic Orchestra’s preview program, where Kim Sun-wook gave a talk, was its seventh preview.
All 150 seats for the free session were reserved within a day. Kumho Art Hall was also crowded with 200 fans on Aug. 18 eager to learn about “Symphony of a Thousand.”
The guests were preparing for the Shanghai Symphony Orchestra’s concert, which was held Aug. 23.
The popularity of preliminary sessions is attributable to guests’ increased desire to learn more about the music performed.
“People often get bored when they listen to unfamiliar classical music. But once they become acquainted with it, they will notice that the tune is very amusing. They will even feel that the concert runs short,” Jin said.
“By attending preview programs, I can find out the hidden meaning of the music, which is the most intriguing part,” said Hong Seong-hye. She has attended all the preview sessions organized by the Seoul Philharmonic Orchestra.
Some countries already have introduced similar programs. The New York Philharmonic Orchestra holds a preview program called “Pre-concert Talk” for every concert. The Metropolitan Opera in New York also makes good use of “Opera Experience,” attracting more guests. To attend the program, guests need to purchase a separate ticket for the price of $50 to $80.
To keep up with the trend, more and more concert organizers are offering preview sessions. The pre-lecture for the Vienna State Opera will be held Sept. 8. The National Opera will hold a pre-lecture in October to promote “Macbeth.”
“After observing that all the preview programs filled up, we decided to hold a preview session for every subscription concert,” said Baek Su-hyeon of the Seoul Philharmonic Orchestra’s promotion office.