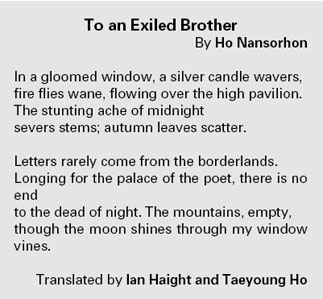 Ho Nansorhon (1563-89) is perhaps one of the most famous yet underappreciated female poets from the Joseon Dynasty. Her work was published in a complete poetry collection by her poet brother, Heo Gyun, in 1589, spreading her literary fame as far as China. But much of her work today remains unnoticed. She is remembered mainly as a female poet who had a tragic life and an unhappy marriage whose life ended with her early death at 27.
Only recently has her poetry collection been put together in English as part of the Daesan Foundation’s translation project for Korean literature.
Ian Haight, who teamed up with Taeyoung Ho, shares his experience about the translation of Ho Nansorhon’s poetry.

Q.How many works are in the collection?
A.We will translate her entire known body of poetry, except maybe one poem she wrote at the age of 8. We may translate that poem and put it in an appendix, but it isn’t as good or important as the rest of the poems to be included in the main manuscript. In total there are about 55 poems. One of the poems is in 87 sections, another is in 20, and there’s a cleverly structured poem mostly in prose that runs for two pages.

How are the poems divided formally, and what phase in the poet’s life were they written?
This issue is a tough one. Traditionally a manuscript of poems in classical Chinese is arranged according to form, but it’s easy to lose the feeling of a poet’s voice and vision by doing this. So our manuscript will be arranged according to our understanding of Nansorhon’s life ― what she was doing, feeling and thinking according to certain periods of her life. We don’t know exactly when she wrote any specific poem. But we do know about the important events in her life that she wrote about, when, for example, she got married, when her brother was exiled, when her children died and so on. From these events we can create a context for the poems, and structure the manuscript accordingly.

What compelled you to translate the works into English in the first place?
In 1999 I decided to take writing seriously and I enrolled in an MFA/creative writing program. During the course of the program I realized that every writer I respected had at one time or another done translation. I decided that if I was going to be a good writer I had to do translation.
So as I took a deeper interest in Korean literature and talked to my Korean friends about it, my friend Heo Tae-young, to my surprise, turned out to have a secret passion for poetry, and showed me a poem by Nansorhon. I read a few lines of a Korean translation of Nansorhon’s somewhat famous poem, “Lament for Children,” and was immediately smitten.
Could you briefly describe the process and the roles you share with Taeyoung Ho in the translation of the book?
Ho makes English translations for every Chinese character, and provides detailed information about names mentioned in the poems, anecdotes and idiomatic expressions. From this, I interpreted and composed an English version. He examines this version, we talk about it, I revise according to our conversation, and we continue like this until we are both satisfied that the poem is finished. After this, I show the poems to my colleagues and editors in America, and we revise again, according to our response to their comments.

What differentiates Nansorhon from other female poets of her time?
Her poems are the oldest and largest collection by a Korean female writer to survive history ― at least until the 16th century. Because of that, we have a sense of what it was like to be a female noblewoman in 16th century Korea. If we are attentive, we can understand what social problems she and others faced in her time. It’s also how she dealt with her isolation and sequestering: her imagination cultivated a vivid world of Taoism, and it’s likely she hoped to go to a world like that after dying.

What are some factors that English-speaking readers should have in mind when they read her poems?
Undoubtedly Nansorhon was a passionate woman. She clearly loved life but endured tremendous sorrow that perhaps made life unbearable for her. She married so young by our modern standards ― at the age of 15. I do think she loved her husband, despite their troubled relationship. She died at the age of 27, and there is some speculation, I think worthy of consideration, that she committed suicide. These are all very relevant issues to her poetry.