[TV review]A Burst! in my brain leaves me no wiser

[TV review]A Burst! in my brain leaves me no wiser 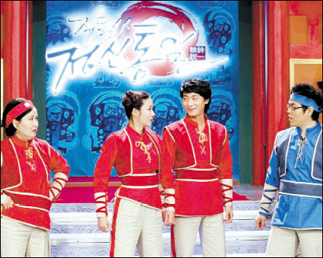 Dancing in a dress like the one Marilyn Monroe wore in “Seven Year Itch” and singing Madonna’s “Like a Virgin” does not seem to have much to do with improving dull minds. However, for the producers of the SBS-TV show, “Burst! Mind Concentration,” these activities go to the heart of the issue.
Airing on Saturdays at 6:40 p.m, the show’s mission statement is to “tighten up the loose brains” of TV viewers.
Well, I wonder how the producers jumped to their conclusion about the status of TV viewers’ brains. However, that’s the premise of the show and the producers brag that their material can “instantly clear your brain if you watch for a few minutes.”
When the show launched, it was a long way from being on my to-watch list, and I successfully stayed away from it until late last Sunday night when I encountered it as a cable TV rerun. I thought I could use something to enliven my brain before Monday morning, so I decided to devote several precious minutes of my life to the show.
Burst! is more of playground for slapstick games than a severe drill session for the addled brain. I decided I did not need a fresh IQ test to conclude that my brain did not get any smarter as a result of watching an episode.
Watching the comedians and TV celebrities dancing like Madonna and bumping into thick Styrofoam walls didn’t seem to make my brain more supple.
The show’s episode last Saturday had two segments where two teams of TV celebrities competed.
In the first segment, each team sends one of their members to the edge of a pool. Then they are given a question written on a huge piece of Styrofoam, which also has spots for the answers. They have to respond to the questions quickly by choosing the location of the right answer.
If they choose the part of the Styrofoam with the right answer, they are spared the punishment pool. If the person chooses the wrong answer, however, he or she goes down into the water.
One of the questions asked was, “Who is the composer of this piece?” posed while a few bars from a Beethoven symphony was played and portraits of Beethoven and Mozart were displayed.
Other questions included, “What is the right answer to the question ‘How is it going?’ when asked in English?” The two available answers were, “I’m going to school” and “I’m doing okay.”
Sometimes, there would be no questions at all, but just holes in the shape of a certain theme, and players had to quickly adjust their bodies to pass through the holes.
Most of the time the celebrities fell into the pool, which offered the sadistic kind of pleasure some of us get from seeing other people in trouble.
The other segment has even less to do with intellectual improvements. It puts the teams into certain “real-life” situations, such as “at a job interview” or “at the zoo as a trainer.”
Then contestants were asked to arm wrestle, feed lions or shear sheep. In the meantime, they are asked questions about their tasks and the first one to give the right answer wins.
Losers of the games were punished by having to dance like Marilyn of sing like Madonna, or they could choose to be Boy George or Elvis instead.
The most memorable part of the one-hour show was the presence of the lion and the lambs in the studio, but the producers couldmake better use of their budget by making sure their show remained true to their mission statement.
At least, they should just drop their theme of “smart brain games” and just choose to be a fun, harmless variety show, freeing themselves from the self-imposed burden of improving their viewer’s IQ. We are perfectly happy as we are.