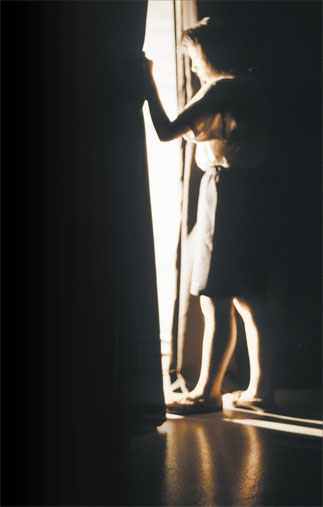 When Nlan, a 24-year old Vietnamese woman, married a Korean man four years ago, she had no idea where her life would head. She certainly never imagined that her two babies would be sent away to another woman.
Nlan was living with her parents near Ho Chi Minh City after graduating from high school when she first met her husband through a broker. She was told that he had been divorced once and wanted to start a new family. His past didn’t bother her, so they soon married, and Nlan became pregnant. Shortly after the delivery of her first child, however, her husband suddenly asked her to send their baby to his ex-wife.
“My husband tried to convince me by saying that we could have another baby, but his ex-wife couldn’t,” Nlan said. “He said she lives a lonely life now.”
She reluctantly agreed, and moved on with her life.
After giving up her baby to her husband’s ex-wife, Nlan gave birth to her second child in 2005. Soon, however, her husband suggested that they also send their second child to his ex-wife. When Nlan came home from the hospital, she discovered her second child was gone.
Shortly after the incident, her husband asked for a divorce.
"I was too young and naive at that time,” Nlan said. “I had no friends or family whom I could ask for help. And I didn't speak Korean at all. When my husband’s attitude turned cold, I could do nothing except sign the divorce contract.”
After divorcing him, she found that her husband had reunited with his ex-wife with Nlan’s children. Nlan then realized that she was used as a surrogate mother for his husband’s marriage because his ex-wife was barren. Now she is pursuing a legal suit against him.
As the number of Korean men marrying foreign women steadily increases, domestic conflicts have become a serious social problem in Korea. In July, the UN Convention on the Elimination of All Forms of Discrimination against Women, or Cedaw, released a report that expressed concerns about the increased number of international marriages in Korea, which may lead to foreign women being trafficked to Korea for forced marriage or exploitation.
According to 2006 data from the Korea National Statistical Office, Korean men who married foreign women totaled 30,208 marriages, or 9.1 percent, in Korea. That ratio was less than 1 percent in 1990. The statistics show that South Korea is quickly transforming from a so-called homogeneous society to one with a more multicultural makeup.
Last year 41 percent of the 8,596 Korean men in agriculture and fisheries, who are seen as undesirable potential husbands by educated women in Korea, have chosen wives from other nations, mainly China, the Philippines, Vietnam or Cambodia.
“International marriage in Korea can be attributed to macroscopic and structural factors like globalization, unbalanced economic development between nations and the traditional patriarchal family system,” said Yoon Hyeong-sook, a professor at Mokpo University. “In general, marginalized men in our society who have difficulties in marriage or reproduction tend to marry foreign women. By providing private labor in sexual and domestic services, foreign wives are put under their husbands’ control.”
After first or second meetings coordinated by international marriage brokers, the couples settle down in Korea. Such a short betrothal process can cause serious conflicts leading to domestic violence, such as the case of Conie, who asked not to use her last name.
After escaping from her violent husband a few months ago, Conie, a 31-year-old Filipina, has been staying at a missionary shelter with her two young daughters, aged 3 and 5. She said that her husband, who had married once before in Manila, physically and verbally abused her throughout their marriage.
“I think the most serious problem between us was that I had a job while he was unemployed,” Conie said. “I worked at an apple farm for six hours a day. But he couldn't get a job. He even beat me when he was sober.”
Mel, 25, had a similar experience. She left her home last February after fighting with her husband, who is 20 years her senior.
“He drank every day and used to lose his temper easily,” Mel said. “I had no idea why he was upset so often. I had to stay at a subway station one night because I didn't have money with me. It is the most miserable memory in my life.”
Professor Yoon points out structural problems that have caused problems with international marriages in Korea.
“Socio-structural differences in value systems and lifestyle can cause domestic violence, which is the most serious violation of human rights,” Yoon said. “It is necessary to create more realistic and prompt political solutions to protect foreign wives.” 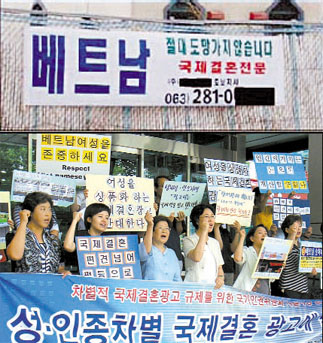 Cedaw also urged the Korean government to speedily enact the draft law to regulate the activities of marriage brokers and to develop additional policies and measures to protect foreign women from exploitation and abuse by marriage brokers, traffickers and their spouses. The committee recommended providing women with viable avenues of redress against abuse by their husbands and increased awareness of the rights among foreign women, including measures available for protection and prevention against domestic violence.
The Korean government had tried to provide more counseling services, including Korean lessons, legal services and protection from domestic violence for exploited foreign wives. But these efforts have not been effective enough.
Professor Lee Seong-mi at Wooseok University said, “Most immigrant women are brought up in a bilateral or rather gender-equal society. Thus, when a Korean man from a male-oriented society marries an Asian woman from relatively more gender-equivalent societies, conflicts become serious.”
“It would be helpful to teach Korean husbands about their wives’ cultural background and value system to solve domestic problems,” Lee said.
At a monthly gathering of Filakor, a Filipino-Korean couples’ gathering, several wives spoke out. “Korean husbands act like kings at home,” one said, declining to be named. “They don’t try to understand who we are or what we are. [In my marriage,] I am the only person who has to adjust to everything. That causes problems between my husband and me.
“I would like the government to give such lessons to our husbands and get involved in our domestic problems when conflicts become violent.”