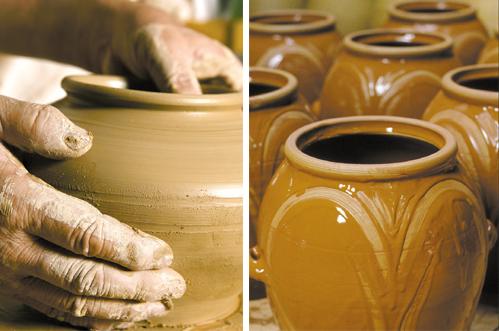 37th in the series Onggi, Korean pottery
Bae Yo-sub feels most at home sitting at his potter’s wheel with his hands covered in brown clay. As a craftsman of the traditional Korean pottery called onggi, the spinning wheel and clay have been a part of his life since he was 13. Now 83, he is happy to see his son and granddaughter pursuing his craft, though sad to see that onggi fading away from daily Korean life.
Bae fondly remembers the days when he had long lines of customers waiting for his pottery. There were hundreds of fellow onggi makers in Seoul then, but that was long ago. As one of the last onggi makers now left in the city, Bae has been designated a cultural asset by the Seoul city government.
For centuries, onggi has been pottery for everyday use, rather than artistic chinaware made of white and celadon porcelain. From a small jar that enshrines a home guardian spirit to a pot that stores kimchi, these dark brown-glazed crockery pieces encircled with simple patterns have been a quintessential part of daily Korean life for centuries.
A typical part of a traditional Korean house had a terrace on the yard reserved for onggi jars of various sizes containing different sauces and pastes. 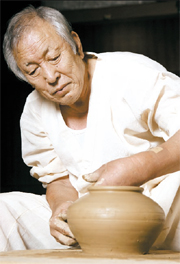 Bae Yo-sub works at his potter’s wheel, as he has done for the past seven decades. By Kim Hyun-dong

Woo Kwan-ho, a professor of pottery at Hongik University, says onggi was a kind of “life partner” for Koreans of all social classes. “Onggi pots were widely available and affordable. They came in all different shapes and sizes for different household uses, such as storing kimchi, or for use as chimneys or to store fertilizer, just to name a few,” Woo said. The food culture of Korea played a role in the development of onggi, Woo noted, especially the need for containers to keep and ferment food such as kimchi.
To Bae and his family, however, crockery has been more than a daily living supply ― it has been a means of survival. His family became Roman Catholic during the late Joseon Dynasty, when the religion was first introduced to Korea. In the strictly Confucian society, Catholics suffered severe persecution and believers had to hide in the mountains. Bae’s great grandfather was no exception.
Deep in the mountains, his great grandfather became an onggi maker. The hills were rich in clay and wood, and after building a kiln, it was relatively easy to start an onggi business, Bae recalled from a story he heard. Bae’s family and other Roman Catholics survived by making and selling onggi.
“I heard stories that Catholics delivered Bibles by hiding them inside big onggi pots to avoid detection,” Bae said. The efforts to keep their religious beliefs paid off, and his family members are still devout Catholics. Bae’s first name, Yo-sub, is the Korean pronunciation of the Catholic name, Joseph. 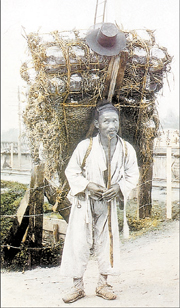 Archival photograph of an onggi salesman, who would have traveled around towns carrying pots for sale on his back during the late Joseon Dynasty. [JoongAng Ilbo]

Min Kyung-eun, the chief curator of the Onggi Folk Museum in Seoul, offered an academic background to the relationship between the early Korean Roman Catholics and onggi making. “Catholics formed communities in geographically secluded regions, such as deep in the mountains, and found onggi making a suitable way to make their living,” Min explained. That is because pottery making requires group work for digging, pounding the clay and baking the pottery in the kiln. She added that the Catholics found the inner part of their kilns a good place to hide and worship. Plus, it took only earth, wood and water, all of which were readily available in the mountains. Pottery making also did not require a high level of art, like making celadon or white porcelain, Min noted. Teamwork was key in gathering the clay, shaping the pottery, drying it under the sun, enameling the dried pots and baking them in the kiln for more than a week to get a dark glaze.
Even after the end of the Joseon Dynasty was followed by Japanese colonial rule (1910-1945) and the Korean War (1950-1953), many descendants of the Catholics continued to pursue the trade in the face of adversity. As one such Catholic descendant, Bae said that it was only natural for him to pursue the craft. He said he simply grew up with it.
Bae saw the height of his business right after the end of the Korean War, when all households needed to start anew after the ravages of the war. Bae’s workshop in Sinnae-dong, northern Seoul, had long lines of customers waiting to buy his pots to store their kimchi, red pepper paste and soy sauce. “I was so busy that I barely had time to go to the bathroom,” Bae said.
Today, however, kimchi pots have been replaced by modern kimchi refrigerators, and a household that makes its own red pepper paste or soy sauce is a rarity. The demand for onggi pots has significantly decreased, and Bae has felt it to his bones. He has managed to keep his studio in Sinnae-dong, but all his colleagues have deserted the craft, earning him the nickname “the last onggi maker in Seoul.” Bae himself cannot bake his onggi pots in Seoul any more, because the apartment complexes that have taken over the neighborhood complain about the smoke from the kiln, he said. 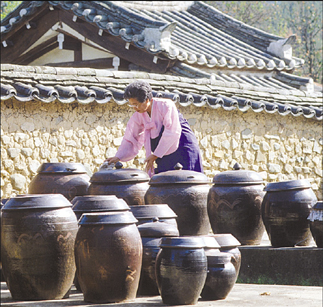 A typical scene at a Korean home would include a yard for onggi pots of different sizes and uses. It was an important duty of the house help to take care of them. [JoongAng Ilbo]

Bae is well aware that he cannot fight the changing tide. Still, he remains chagrined by a modern society that does not appreciate onggi, a feeling rooted in the deep pride he has built over decades. “Onggi serves as the ideal storage for fermented food or other kinds of food that need to be preserved for a long time,” Bae said. The reason, he said, is because onggi pots “breathe.”
Curator Min of the onggi museum explained, “As the clay used for onggi contains dust and roots of plants, the pots get tiny holes in them when they are baked in the kiln.”
Those holes allow air to pass in and out of the pots, Min said.
“Onggi brings life to everything and even the taste of water changes for the better when kept inside onggi pots,” Bae said. “There is nothing like kimchi fresh out of an onggi crock buried in earth during the winter.”
As an aging craftsman, Bae is concerned about the future of onggi. After seeing the heyday of his career, which included traveling around the United States, he now finds it physically challenging to make onggi pots as vigorously as he did in his youth.
Instead, he gives demonstrations at the Seoul city government center for cultural assets and makes smaller pots. The only way to quiet his worries about the future, he said, is to sit at the spinning wheel and make pottery.
“I wonder how many more onggi pots I can make before I die,” Bae said.


Where to see onggi pottery

Onggi Folk Museum
Located in Ssangmun-dong, northern Seoul, this museum is dedicated to the crockery craft, but also features many other household utensils. It opens at 10 a.m. and closes at 6 p.m. from March to October and at 5 p.m. from November to February. The museum is closed Mondays, during the Lunar New Year and Chuseok holidays. Admission is 3,000 won ($3) for adults and 2,000 won for children and teenagers. The museum is best reached from Suyu Station, line No. 4, exit No. 3.
For more information, call (02) 900-0900 or visit www.onggimuseum.org.