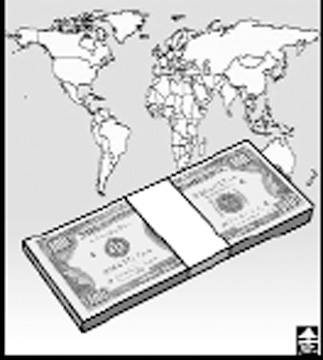 Addison Wiggins, who wrote “The Demise of the Dollar and Why it’s Great for your Investments,” says the biggest mistake President Nixon made was not the Watergate affair. Instead, considering its impact on later history, Nixon’s worst mistake came in 1971 when he put the dollar on a floating exchange rate, decoupling it from the gold reserve.
Since the United States abandoned the gold standard ― which fixed one ounce of gold, approximately 31 grams, to $35 ― American households, companies and the government have become lackluster about deficits, saying they believe in the power of the United States as a reserve currency country who are willing to issue as many dollars as they want.
Consequently, the United States has suffered irreversible twin deficits, both in trade and in finance. Just as in a tale told by Warren Buffet, the United States has become a wasteful town. It believes interest rates and prices will forever sink and that housing and stock prices will forever increase. For 20 years, the people of this wasteful town have borrowed money ― issuing dollars ― and bought products made by the people of the thrifty town ― Asia ― which diligently built factories and created jobs and products. President Abraham Lincoln also created huge troubles in the U.S. economy due to inflation which resulted from recklessly issuing greenbacks to support the war expenses of the Union Army during the American Civil War.
The U.S. dollar has fallen steadily during the last five years. The dollar is now at $1.42 per euro, the lowest rate ever. Converted to the Korean won, it is 913 won to $1. This rate is similar to the exchange rate exactly 10 years ago, Oct. 2, 1997, right before the Asian financial crisis. If it is true that the currency is a way to gauge the strength of an economy, the Korean economy has improved during the last decade while the American economy has weakened. However we should be advised not to be fooled by the numbers that our GNP has now reached $20,000 or $30,000 because of the fantasy-like exchange rate, and we should not slide again from a thrifty town to a wasteful town as we did before the financial crisis. In that sense, the news that the deficit in tourism in August was by far the largest in history is quite ominous.
Meanwhile, if this is truly the time when the hegemony of the dollar, or Pax Dollarium, is collapsing, we need new insight to prepare for the coming age.
Although English remains a language of opportunity, the U.S. dollar is losing its sheen as a currency of opportunity. We need to be ready for the possibilities that the euro or the yuan could become the next reserve currency.