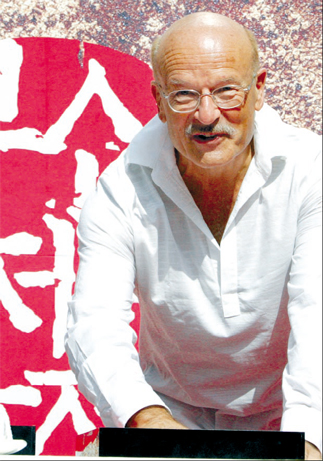 German director Volker Schlondorff makes a handprint in wet cement in a ceremony during the Pusan International Film Festival in Busan yesterday. The PIFF opened there Thursday with the largest number of world premieres in its 12-year history. [AP]

BUSAN ― Attracting everyone from master filmmakers to cinephiles to Busan residents, the Pusan International Film Festival here has gotten off to a smooth start, highlighted by a number of politically driven films in the wake of the inter-Korean peace agreement signed last week.
Long queues for tickets have been starting around 6 a.m., well before the ticket offices open.
In its 12th year now, a growing number of films are premiering here from all over the world. Chinese director Feng Xiaogang kicked the festival off Thursday with a screening of “Assembly,” focusing on China’s civil war in 1948 between the nationalists and communists.
On Saturday, Korean director Kong Mi-yeun premiered her documentary “Battlefield Calling,” about the lives of Korean soldiers and how their views are changed by the conflicts they see.
“I began this project when I realized that for this generation, war is not something that happens to other people,” Kong said, according to Agence France-Presse.
In a bid to grab a piece of the spotlight, Korea’s presidential contenders, Lee Myung-bak, Chung Dong-young and Kwon Yong-gil stepped on the red carpet on Thursday. The heroes of the festival, however, were from the celluloid.
Dozens of star filmmakers and actors, including heartthrob actors Takuya Kimura from Japan and Kang Dong-won from Korea, plied the theaters along Haeundae beach on Saturday.
Master filmmakers also made the rounds. Volker Schlondorff, the renowned postwar German director whose works include “The Tin Drum,” lectured cinephiles and aspiring filmmakers yesterday.
These lectures, called “master class” sections, are some of the festival’s top attractions. Schlondorff yesterday will be followed today by Mohsen Makhmalbaf, the Iranian director of “Kandahar,” and Claude Lelouche, the seasoned French director of “A Man and a Woman” on Wednesday.
Even film novices said they are enjoying the festival. Joo Myung-soo, a 60-year-old housewife and Busan native, said she makes sure to attend the festival every year to catch a glimpse of the actors. Joo did not miss the outdoor session on Saturday involving two award-winning Korean actresses, Kang Soo-yeon and Jeon Do-yeon.
Haeundae beach at sunset shined that night with flashes from cameras and shouts from the fans. Kang said her dream is to “still be acting as a grandmother.”
Jeon said, “Film gives me a way to identify my existence.” Jeon earned the best actress award this year in Cannes for “Milyang” (Secret Sunshine). Kang won the award in 1987 Venice for “Ssibaji” (Surrogate Mother).
On Asian Film Night, about 300 attended a ceremony to honor the veteran Asian filmmaker of the year, the late Edward Yang of Taiwan.
The renowned filmmaker, who died in June, led the Taiwanese new wave cinema from the 1980s. Yang made acclaimed films with social critical themes, such as “Confucian Confusion” and “A One and a Two.”
In place of the director, his surviving wife, Kaili Peng, and their 6-year-old son, Sean, attended the ceremony. With tears welling up, Peng, a concert pianist, noted that Saturday was the 100th day since the director died.
“He had a great passion for filmmaking, and he would have been very happy to receive this honorary award,” Peng said. She later told the JoongAng Daily, “I don’t feel like he is gone,” noting the chance to live with films still lingering after his death.
The Korean Cinema Award for promoting films from this country, meanwhile, went to Sabrina Baracetti, the commissioner of the Udine Far East Film Festival in Italy, and Jean Francois Rauger, head programmer of the Cinematheque Francaise in Paris. Several of the filmmakers praised the Busan festival. Allain Jalladeau, the artistic director of Festival des 3 Continents Nantes, France, said, the “Pusan fest is undoubtedly the best film festival in Asia now.”
Emmanuel Bottiau, the director of Alliance Francaise, a French cultural center in Busan, agreed. “It’s becoming easier to convince directors and actors to come to Pusan instead of other competing festivals around this time,” he said.
Kim Ji-seok, a programmer who has been with the festival since its birth, welcomed the praise. “This year, we are having a bigger number of audience members as well as films being premiered,” Kim said.