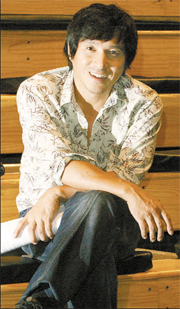 Jo Jae-hyeon, actor and programmer of Yeongeukyeolgeon 2008 or “A Hot War of Plays.” [JoongAng Ilbo]

In 2004 Seoul’s Daehangno (a hub for the theater arts in Korea) was a bundle of energy with the introduction of “Yeongeukyeolgeon” or “A Hot War of Plays,” a theatrical festival that featured beloved Korean productions from the 1980s including “Cheongchunyechan” or “Glorious Youth” and “Guangaekmodok” or “Blasphemy on the Audience” It was as if there was a renaissance in Korean theater.
It didn’t last. The festival disappeared, lingering only as a legendary event in the memory of its participants.
However, it seems as though a new era has begun in Daehangno, now that actor Jo Jae-hyeon (known for his roles in films like “Hanbando” or “The Han Peninsula,” as well as plays and television dramas), stands at the center of a 2008 revival of Yeongeukyeolgeon. Jo is participating, not only as a famous face to promote the festival but also as a producer, public relations figure and actor. His new title, printed on his business card, is “2008 Yeongeukyeolgeon Programmer.” The JoongAng Ilbo met up with the actor/programmer and discussed his new found role.

Q.Why Yeongeukyeolgeon?
A.I acted in the play “Equus” during the 2004 festival. It was one of those moments when I felt it was possible to popularize plays again. And earlier this year, I was further inspired by acting in “Gyeong-suk, Gyeong-suk’s Father.” I proposed reviving the festival to Hong Gi-yu, head of the DongSoong Art Center and the organizer of the original Yeongeukyeolgeon. I suggested a line-up that centers around smaller plays rather than big-scale productions.
There will be 12 plays in total ― six new plays, six old ones ― in three theaters over the course of a year. The opening play will be “Awkward People,” by film director/poet Jang Jin.
What is the direction of the 2008 version of Yeongeukyeolgeon?
We stayed away from heavy, abstract or overly metaphysical productions, plays that only satisfy the makers and not the audience. However, we also didn’t want the festival to be like “Gag Concert” (a slapstick comedy program on television which has become a comic play series in Daehangno). We wanted to find a middle ground in which the audience could relate to the stories but where the basic foundation was a collection of great plays.

Many of the actors and producers are major stars (including Yu Gi-tae and Moon Seung-geun).
It’s kind of our secret weapon to lure in an audience that is not really interested in the theater arts. Gathering all these stars to participate in the festival was one of my major roles as the programmer. The pay for featuring in a play is much lower than in television or film. Fortunately, a lot of the stars agreed to participate as they saw that our program was artistic as well as having the potential to be a commercial success. Film director Kim Ji-hoon, known for directing “Hwaryeohan Hyuga” or “May 18,” as well as Lee Soon-jae and Ji Jin-jee will also participate.

Are you thinking of playing any other roles for the festival?
Once the curtain goes up and the festival starts, my role as programmer is over and I will just be an actor again. The plays themselves are the heart of the festival. I hope that Yeongeukyeolgeon will continue to happen every four years. I also plan to build a small theater with a distinctive artistic direction.