Her heart said that studying abroad was her last chance

Her heart said that studying abroad was her last chance 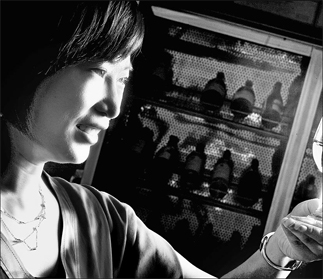 Choi Hae-sook had the courage to draw her life as a designer to a close so she could search for a job she truly enjoys. By Kwon Hyuk-jae

Thirty five was a tricky age for a single woman like Choi Hae-sook. She felt she was too young to settle for what she had but too old to take big risks.
As an interior designer for LG Chemical, Choi was having a successful career, after majoring in sculpture at college and a brief career as a textile designer.
Her job at LG kept her busy and mostly happy, but she felt that something was missing. After she had worked at the conglomerate for 10 years she began dreaming about the launch of a second life.
“I was beginning to feel drained,” Choi said. “I was dying to recharge myself, but did not know what to do.”
Then fate came knocking at her door. In 2000 a friend who worked for magazines as a food coordinator asked Choi to help with some projects. The kitchen was not her best friend and she was no expert at cooking, but she jumped at the opportunity.
For months, she studied foreign food magazines and ransacked Namdaemun Market in search of the best plates. Her efforts paid off and her first effort at food coordination ― the art of presenting food beautifully ― ended up in a magazine.
She quickly developed the urge to become an expert at cooking and food coordination and made the daring decision to quit her job and study abroad. She had money available in the form of savings for a down payment on an apartment.
However, Choi had to fight objections from her family and friends who said, “It’s a time to seek a husband, not a new life,” and “It’s not good to desert a successful career where you have job security.”
“I was scared about the change and I had to worry about my finances,” Choi said. “So I took a deep breath and listened to my heart and it said this was my last chance.”
In 2001, Choi finished a two-month course at a cooking school in Piemonte, northern Italy and started as an apprentice in a local restaurant. She does not remember the experience with much fondness. Living in tiny quarters at the restaurant, she barely had a moment to sit down as she trimmed shrimp and made pasta dough from morning to night, without much opportunity to touch the cooking utensils or prepare any dishes.
“I used to wake up with regrets, but I hung in there, reminding myself that it was my last chance.”
Three months later, she was hired full-time and was allowed to get more involved. Shortly after, she got a job cooking at another restaurant. She then developed an interest in wine and began going to a sommelier class, working by day and studying by night.
“I was tired, but happy, knowing that I was doing what I wanted to do, despite my age.”
Choi qualified as a sommelier and then began to feel homesick. In 2004, she returned home and got a job as a teacher of a wine class. Now, she works for Wine Nara, a company that offers courses about wine and table manners and does party planning.
These days, Choi, now 41, dreams about changing Korea’s party culture and creating events that specialize in wine and cooking.
“I ran risks and took more chances. And I will keep running risks and seeking challenges, so that I will have no regrets about the way I have spent my life,” Choi said.