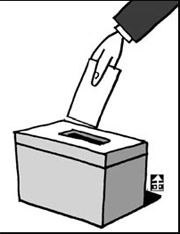 Cell phone service started in Korea in July 1988. Less than 20 years later, more than 42 million people here use them.
The number mean that 87.7 percent of Koreans own at least one cell phone. A mobile phone supports not only text messaging, but also dozens of advanced functions such as games, shopping, watching TV, Web browsing and financial transactions.
Yeouido is seeing a cell phone frenzy out of the blue these days.
The largest party in the National Assembly, the United New Democratic Party, got 240,000 people to register to vote via mobile phone for its party primary. The three candidates are struggling to garner votes by cell phone.
Switzerland was the first to use cell phone voting in an official election. In an October 2005 local election in Bulic, Zurich, 16,700 residents voted either on their personal computer or cell phone. The theory of cell phone voting is not much different from postal or Internet voting. It gives people the chance to vote anywhere they want.
However, mobile voting or e-voting hardly ensures the secrecy of one’s vote. Somebody may vote on behalf of the actual voter, and the risks of computer hacking still exist.
These are the reasons why Denmark, Finland and Iceland have not adopted such a voting system, even though the countries have more registered cell phones than citizens.
According to the “diffusion of innovation” theory of Everett Rogers, innovation is finding something new that can be applied to a specific good or service.
In that sense, cell phone voting can be considered an innovation in the political market. It breaks the spatio-temporal and psychological limits of paper voting.
Athens, the city where democracy is said to have been born, followed a procedure called ostracism 2,500 years ago. The name of the person who should be expelled from the city was written on a piece of broken pottery.
Since then, people have participated in a variety of voting systems such as raising their hands, applauding, running a lottery, yelling, forming lines and so forth.
The electoral commission postponed using a mechanical voting system using “touch screen” technology from the next general elections to the local elections in 2010. That is because the National Assembly cut off the entire budget for the new system last year. It is still unclear whether the commission will get any funding in the budget this year. Information technology flies at a dazzling speed, but the administration crawls inch-by-inch.

*The writer is a political news editor of the JoongAng Ilbo.