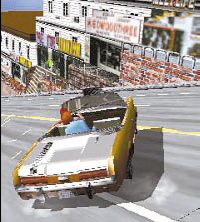 When I first played Crazy Taxi at an arcade, I thought to myself “Wow!” It clearly stood out from other racing games because it was insane!
Instead of riding in a given lane behind smoking competition and crying “Noooo!” when cars on the opposite lane are about to collide with you, you get to drive crazily around town ― picking up people and completely ignoring the road regulations. The game is pretty much like a Seoul taxi cab, just less picky in the customers it takes for a ride.
“Crazy Taxi: Fare Wars” is high up on the charts as the craziest driving game of this century. Crazy Taxi follows the form of its original arcade version, where the player picks up the customer and has to arrive at the destination within a certain time. During the drive, additional points are given for doing tricks like jumps and swerves around corners. The high-speed chase through town while nearly hitting or actually bumping into pedestrians makes this game insanely humorous and an adrenaline-pumping thrill.
Basically, Fare Wars is hardly any different from the arcade or the PS2 version. The only difference is that it has gone portable.
For the portable version, it’s still not easy to control the drive, and it takes some time to get used to the controls. Once that happens, though, hang on for the wildest drive ever.
One of the best points of playing this game is the killer soundtrack. What’s a racing game without ear blasting songs? The background music is hip and really helps speed things up. Fare Wars remain as wacky as it was on the other two platforms. Some things are best when they remain the same.
By Lee Ho-jeong