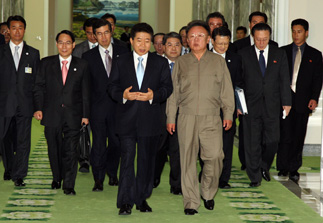 The leaders of North and South Korea, Roh Moo-hyun, left, and Kim Jong-il, step out of the Paekhwawon State Guest House in Pyongyang after their second day of meetings during the inter-Korean summit on Oct. 3. Provided by the press corps at the summit

Spokesmen for the White House and the State Department have officially said that the United States supports North-South Korea talks, but there are likely to be some hard questions when the Blue House dispatches a team to explain the summit.
First and foremost is the thin attention to denuclearization, essentially reaffirming the September 2005 agreement, with nothing new. Even without such a reference, President Roh Moo-hyun could have pressed Kim Jong-il to fulfill the obligations of the Feb. 13 agreement, but he did not.
Symbolically this looks like a decoupling of North-South economic cooperation from denuclearization, which would contradict several U.S.-North Korea joint statements and the understanding that North-South reconciliation is important, but cannot be disconnected from the nuclear talks.
If the six-party agreement on dismantling Yongbyon does progress to a full declaration that includes the North’s weapons and uranium enrichment programs, then no damage will be done.
But there is still ample evidence to suggest that the North intends to stop at the dismantlement of Yongbyon and then receive international aid and the lifting of sanctions without abandoning its arsenal of about nine nuclear weapons. That would be a dangerous outcome, and the North-South joint declaration of Oct. 4 did nothing to prevent that scenario.
The second area of concern is the second sentence in Article 2 [of the joint declaration], which pledges no interference in the internal affairs of the other side. This appears to be a thinly veiled repudiation by President Roh of the importance of human rights, which President Bush and President Roh agreed were important in their own Gyeongju Declaration in November 2005.
As a leading democracy in Asia, South Korea is moving backward with this declaration at a time when the members of Asean, for example, are rejecting the principle of “non-interference in internal affairs” in their new draft charter and are instead recognizing the importance of human rights under regimes like the one in Burma.
The third area of concern is the third section in Article 3 in which the two Koreas agree to work together to “oppose” war on the peninsula. The suggestion is that the threat to peace is a third power, implicitly the United States. This is a recurring theme for the progressive camp ― that only they can stop Washington from attacking the North.
It is a narrative that damages the U.S.-Korea alliance and does not comport with reality.
As Michael Mazaar explains in a generally critical review of the Bush North Korea policy in the current issue of Foreign Affairs, the problem was that the Bush team never had any intention of attacking the North and Pyongyang knew that.
The fourth area of concern is the first sentence of Article 5 on establishing a peace mechanism. The idea of working on a peace mechanism is not a problem at all and reflects joint agreements in the six-party talks and in the U.S.-Korea bilateral summits. Indeed, reaffirming the North’s interest in this was an important accomplishment. However, the subsequent sentence in which the two Koreas pledge to work for a summit including the United States or China certainly looks like President Roh’s public repudiation of President Bush’s insistence in Sydney that there must be progress on denuclearization before a peace treaty can be signed.
In any case, neither President Bush nor any of the U.S. presidential candidates other than Barack Obama is likely to hold a summit with Kim Jong-il.
Finally, there is the enormous package of new economic cooperation projects and the expansion of Kaesong.
Again, these agreements can have benefits if they empower the North Korean people, teach them market mechanisms, build confidence in the South and follow steady progress on the nuclear talks. Since none of the details are explained in the joint declaration, however, Washing-ton is likely to grill representatives from the Roh government to explain exactly what they mean.
Despite these problems, it would not be accurate to say that there is a sense of betrayal or panic in Washington. The specifics of implementation will ultimately depend on the next government in Seoul. And anyway, the Bush administration has enough crises on its hands without creating another one with Seoul now. In many ways, it is easier to understand the North-South Joint Declaration as a domestic political gesture in South Korea rather than an international agreement with any staying power.
The 386 generation had a great run over the past five years, and this is their last big hurrah. The next administrations in Washington and Seoul will have to think seriously about how to further North-South reconciliation, denuclearization and a strong U.S.-Korea alliance in harmony.

*The writer is a former senior director for Asian affairs at the U.S. National Security Council.