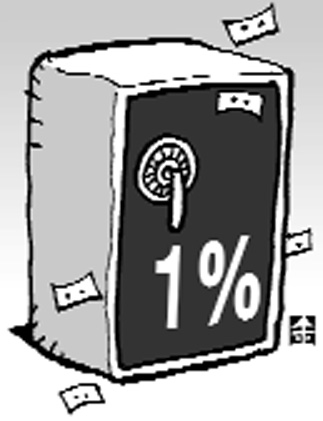 A percentage is a way to express the proportion of something out of 100. It is an easy way to express a relative quantity in mathematics, science and daily life. The Ancient Greeks devised the concept of a percentage. A long time ago, the number 100 came to mean a flawless state for an entity.
Therefore, a percentage using 100 as the standard has naturally become the most common way to describe proportion. When one says “I am 100 percent sure,” he or she is completely sure.
People also use “1 percent” to emphasize that the amount is minuscule. Thomas Edison said genius is 1 percent inspiration and 99 percent perspiration. By 1 percent, he really meant almost zero, a negligible amount.
President Roh Moo-hyun said the fund for economic cooperation with the North will be about 1.3 trillion won ($1.4 billion), which is less than 1 percent of the annual tax revenues of 199 trillion won.
He said “1 percent” to emphasize that the cost for economic cooperation with the North will not be high. Last Friday in Busan, he said he wondered why civil society did not stage a movement to pay 1 percent more in taxes to improve our children’s education. He meant that paying 1 percent more in taxes was not a big deal.
However, 1 percent is not always a small amount. Proportion is a tricky concept. A percentage is about proportion, so even when a percentage holds constant, if the entire amount increases, the absolute quantity of a certain percentage also increases. One percent of 200 trillion won is 2 trillion won, while 1 percent of 300 trillion won is 3 trillion won. The percentage is the same, but the end result varies a great deal. When handling a minute amount, 1 percent makes a huge difference. For precision machinery, an error of 1 percent is not tolerable. A change in the interest rate by 1 percent is powerful enough to shake the world’s economy.
The power of 1 percent goes even farther. Let’s make a chain with 100 rings, each one with 1 percent chance of breaking.
At that point, the possibility that the chain could break would be as high as 63 percent. If the danger of a 1 percent possibility is connected to bigger numbers, that can become destructive.
Meanwhile, 1 percent of smart people can feed the remaining 99 percent of the population for the future.
One percent might sound small but it can be very powerful. One percent can amount to 100 percent. One percent should not be wasted, particularly when it is the people’s tax money.