A director sees the future in Pyongyang’s traffic cops

A director sees the future in Pyongyang’s traffic cops 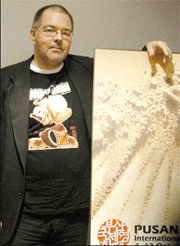 North Korea’s nuclear test on Oct. 9 last year was mixed news for Simojukka Ruippo, a Finnish documentary director whose work has focused on the communist regime.
The test took place just a few weeks after he and his fellow filmmakers had visited Pyongyang for its biannual international film festival.
Ruippo knew the test was bad for global stability but it also gave him a good opportunity to make the most of footage he had taken during his trip to Pyongyang and the Demilitarized Zone. Ruippo and fellow director Jouni Hokkanen ended up making a five-minute short documentary titled “DMZ” and were invited to exhibit it at this year’s Pusan International Film Festival, which ended last week.
His interest in the North grew from his visits to the South.
As an adviser to his home country’s annual Tampere Festival of Asian Film, Ruippo has been to the Pusan International Film Festival every year since its birth in 1996.
In 1999, Ruippo met a German friend at Pusan who told him about Pyongyang’s international film festival. Ruippo discovered that the organizers of the Pyongyang festival welcomed foreign guests who were prepared to bring films made in their home countries.
Ruippo and his fellow filmmakers succeeded in getting an invitation with a Finnish children’s animation film they made in 2002.
The long-awaited 10-day trip to the reclusive capital was “frustrating” for Ruippo, as he had to follow strict orders from the Pyongyang authorities. He was pleased and surprised to see a full house for the festival.
However, he did not enjoy being chaperoned by two young, stern-faced North Korean students who took him to see propaganda films about the wonders of the North Korean water management system.
Ever resourceful, Ruippo and Hokkanen managed to find a niche ― filming traffic policewomen who looked beautiful with their blue uniforms, thick make-up and robotic movements. They took the film in secret during their bus rides. The footage was used to make “Pyongyang Robogirl,” a short documentary that was acclaimed at the 2003 Berlin International Film Festivals.
“I was a little worried when I met North Korean officials at the Berlin festival,” Ruippo recalled. The officials, including a middle-aged gentleman whom Ruippo remembers only as “Mr. Seok,” did not say anything to him.
However, Ruippo learned later from the festival organizers that the North Korean officials asked for the film’s showing to be canceled.
“I also found out that the North Korean officials kept watching the film in the video room,” he added, which he presumed was aimed at preventing others from seeing the film. “I feel really sorry for the officials who had to watch the same film over and over again,” said Ruippo, smiling.
Ruippo was still able to get approval to visit the Pyongyang film fest and ended up making a few more films such as “The Dictator’s Cut.”

Tired of going to the places selected by the Pyongyang authorities, Ruippo and his fellow directors dared to escape their hotel one night and, as a result, found themselves isolated at a hotel on an island during the next visit.
In DMZ, Ruippo’s latest film, he juxtaposes scenes filmed on the streets of Pyongyang and from the Demilitarized Zone, shot from both North and South Korea.
“It’s the same DMZ, but it was so different from the North and the South,” Ruippo said. “Ironically, I had no problem filming the DMZ in North Korean territory, but U.S. soldiers kept me under strict control on the southern side.”
With dominant background music that matches the movements in the scenes of the DMZ the film is more like a music video, according to Ruippo.
Ruippo is no longer very excited about going to Pyongyang, just to travel the same itinerary.
“So little has changed since my first visit, although I could see that there are now new markets with people selling things from China,” he said. “However, the urge to visit a closed society will always be strong.”
Ruippo also has some good memories of North Korean action films based around taekwondo, the traditional Korean martial art.
He recalls being with the star of one of these films when they were surrounded by a crowd of school children who asked the actor to fly like he had in the film. The actor replied, “Sorry, kids, I have a problem with my back, so I cannot fly at this moment.”
Ruippo is now working to create a retrospective of North and South Korean films together, which he thinks will be the first of its kind.
Meanwhile, “interesting” is the word that he chose to describe the inter-Korean summit meeting earlier this month.
He was sufficiently well-versed in the news to know the details agreed between North Korea’s Kim Jong-il and South Korea’s Roh Moo-hyun. “It’s a sign that the North Korean regime is opening up,” Ruippo said. “But I believe that opening process will be very, very slow.”
One thing for sure, he added, is that the regime is not going to last forever. He says that’s one thing he knows for sure, having seen North Korea with his own eyes. 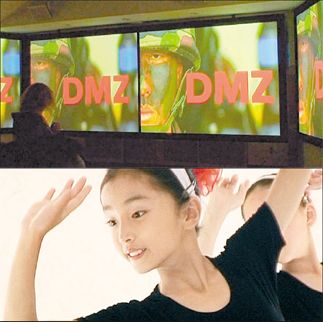