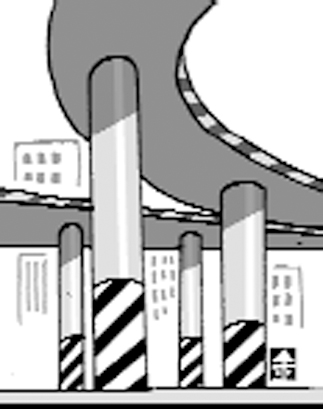 When Lee Myung-bak, the Grand National Party presidential candidate, came to Seoul as a young man from a poor village in Pohang, Gyeongbuk, he was told books for university entrance exams could be purchased at a cheap price in used bookstores near Cheonggye Stream. He went there with a handful of money he’d earned from doing odd jobs. A 40-something-looking man asked him: “What subject are you looking for?”
“I just came to Seoul, I don’t actually know what books are necessary,” Lee said. The shopkeeper gave him a disapproving sniff and continued, “Humanities or natural sciences?” Not knowing the difference, Lee simply said, “I want to study business.”
“Look fellow, that means you need humanities,” the man replied.
Country boy Lee seems to look back on the Cheonggye Stream with bitter memories of poverty and secondhand bookstores. However, not everyone has the same memories of the area.
Novelist Park Tae-won described Cheonggye Stream in old Seoul before its brooks became covered with concrete. A native Seoulite over the age of 60 would remember ladies and lassies flocking together to do laundry at the stream. Park Tae-won’s book, “Observations from the Bank of the Cheonggye Stream,” warmly captures the lives of marginalized people who lived by the stream in the 1930s.
Meanwhile, the statue of Jeon Tae-il, which stands on a bridge near the stream, brings us back to November 1970 when the young man burned himself to death demanding that labor laws be enforced. A poetry tribute to Jeon remembers the young workers who worked horrendously long hours, from dawn to midnight, at small clothing factories along Cheonggye Stream.
The presidential candidate of the United New Democratic Party, Chung Dong-young, used to mention his early family history related to Cheonggye Stream at mass gatherings. He said that while his mother sewed clothes on a sewing machine, he trimmed them beside her and sold them at nearby Pyunghwa Market to make a living.
To both, Lee and Chung, Cheonggye Stream appears to represent nothing but bitter memories.
Lee calls the uncovering of Cheonggye Stream one of his best achievements, while Chung responds that building the Kaesong Industrial Complex is even better.
For ordinary citizens, Cheonggye Stream seems to mean far more than personal bitter memories or political achievements.