The magical sounds of a musical city

The magical sounds of a musical city 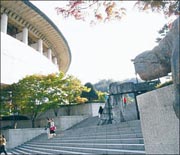 Music is like food to me. I can’t pass a day without some Mozart or Bach. I have found Seoul to be a wonderful source of live performances. I have seen more opera here than I did during ten years in New York and the quality has been outstanding.
Seoul Arts Center (www.sac.or.kr) has been my mecca. Situated in southern Seoul, near the Nambu bus terminal, the SAC complex is dominated by its opera house, built in the shape of a gat, the traditional headgear of Korean men during the Joseon Dynasty (1392 to 1910).
In the last year the eight main buildings of the SAC have offered me a world class exhibition of impressionist paintings, performances of Verdi’s “Aida” and “Macbeth,” Purcell’s “Dido and Aeneas” Prokofiev’s “Romeo and Juliet,” Handel’s “Rinaldo,” performed by singers from Milan’s La Scala and Christmas Carols performed by the choir of Kings’ College, Cambridge.
Next month the SAC will present a performance of Bizet’s Carmen from Nov. 14 to Nov. 17 followed by the Beseto Opera’s rendition of Verdi’s Aida from Nov. 23 to Nov. 27.
Next Sunday the concert hall will offer “A Feast of Overtures and Arias” featuring music from Mozart, Puccini, Verdi and Offenbach. On Nov. 6 and Nov. 7 the English Chamber Orchestra will perform music by Haydn, Vaughan, Dvorak and Mozart.
This range of outstanding musical performance is just a small selection of the SAC’s forthcoming events, and then there is the Sejong Center for the performing arts, (www.sejongpac.or.kr), where I saw a stunning performance of Verdi’s “Rigoletto” last spring.
Located in Gwanghwamun, this venue also has an exceptional program and recently hosted the Budapest Orchestra, a Brahms concert series and a performance of “Chicago.”
Touring around Seoul I have heard exceptional jazz, impromptu performances of traditional Korean music,’70s hard-rock Korean style and hip-hop in Hongdae.
The range and quality of performances show that, in terms of music, Seoul is truly a world city.
There is a confidence about Korean musicians that is not found in such a profound form in other areas, such as food, where too many chefs offer self-deprecating versions of Western cuisine sprinkled with some Korean pickles. To experience the best of Korea’s talent pool, a good place to start is at the opera house in the shape of a gat. It’s also a great place for coffee on a sunny afternoon.