Mimes give audiences the silent treatment

Mimes give audiences the silent treatment 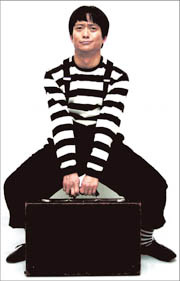 Ko Jae-kyoung, the director of the Korea Mime Council, will perform at “Korean Mime 2007” in Daehangno.

They don’t sing, deliver great speeches or tap dance. They don’t wear fancy costumes or tell jokes. Yet great mime artists can produce compelling performances on stage simply through subtle movements and dramatic use of silence.
If you haven’t seen much mime before, you’ll be interested to know that the Korea Mime Council is staging 25 different mimes in Daehangno until Nov. 11 as part of “Korea Mime 2007.” The festival is in its 19th year. Newcomers and veteran performers will share new work over the next two weeks.
A highlight will be a talk scheduled for this Friday in memory of the renowned French mime Marcel Marceau, who died in September.
Compared to the West, Korea doesn’t boast a long history of mime. A German solo pantomimist, Rolf Scharre, introduced mime to Korea in 1968 at a show co-sponsored by the Goethe Institute.
Since then, mime has thrived in street theater, and in 1972 Yoo Jin-gyu became the first Korean to mime professionally.
Over the years interest in mime has grown, and the Korea Mime Council was established in 1990.
The art of mime originated in ancient Greece and was very popular in 19th century Europe, but it has never gained mainstream popularity.
Yet mime can be just as important as theater in exploring social issues and ideas. Imomggol, a group of mime artists in their late 20s and early 30s, will perform a show next weekend that is highly critical of the rapid development of society and how individuals lose their identity.
Yoo, the pioneer of Korean mime, will also perform this weekend. The theme for his show is “There? Not There?”
Part of Yoo’s performance explores the story of Seung-hui Cho, the Virginia Tech shooter, and the role society played in the tragedy.
“Mime itself is a language,” said Ko Jae-kyoung, the director of the Korea Mime Council. He is also performing three five-minute stories this week. “Mime can communicate values honestly to the world,” he said.
Oh Sung-wha from the festival planning team said, “We want to show that mime is an independent art form.”