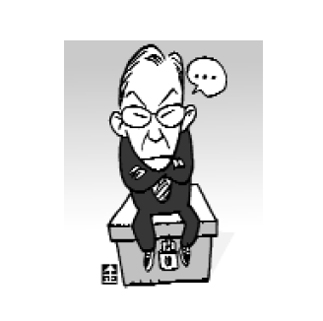 Xie An was a famed man with a powerful family. He also was a very romantic person. He started a career in the court, only to quit because of deadly boredom. Instead, he concentrated on traveling to beautiful places and writing poems.
During the East Jin Dynasty, the united Jin first moved its capital city south of what is now the Yangtze River.

The Xie family, a traditional power north of the river, had to migrate to the new capital city of East Jin, now Nanjing, because the northern nomads invaded.

Although an elite member of a well-known family, Xie An preferred hanging out in beautiful places with celebrities such as Wang Xizhi, a legendary calligrapher revered even by his contemporaries. People knew Xie had the capacity to contribute, so politicians courted him several times. Still, no one could win his heart.

In the meantime, Fu Jian, lord of the Former Qin, expanded his power in the north and focused his military force on the East Jin Dynasty. Alarms were raised when 900,000 Former Qin troops headed south.

The southern dynasties were about to fall prey to northern nomads. East Jin could pull out at least 200,000 troops at best. In truth, the powers of the two parties were as different as heaven and earth.

The court of East Jin called Xie An again to the forefront of the danger. The man who had isolated himself in a mountain as a hermit finally accepted their offer. Now a prime minister, he led the country out of danger with his excellent strategies and military prowess, fighting back the tremendous force of the Former Qin troops.

In a battle widely known in history as the Battle of Fei River, East Jin reaped a huge victory, massacring all of the Former Qin troops. The story of Xie An’s leadership is that a hermit with fondness for nature came down from the mountain to be a hero.
Dong-san jae-gi, a phrase summarized byabove story, came to being through word of mouth. From here, the term jae-gi must have originated. It describes returning to one’s previous occupation after retirement.

Suddenly, former Grand National Party leader Lee Hoi-chang’s possible bid to run again in the presidential election has become a big issue. Many people debate whether it is right for him to run again while the candidate of the Grand National Party is trying to win the election. To return, or to do jae-gi, you need an adequate and dire reason, as Xie An had. If Lee really does run again, he might think that nobody cares about values such as integrity and principles in Korean politics.