She brings home bacon, he cooks it

She brings home bacon, he cooks it 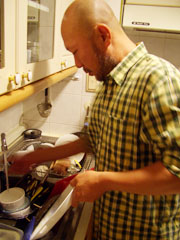 Oh Sung-geun, one of Korea’s growing number of househusbands, stays home and prepares all the meals, does the laundry and carries out all the houehold chores, while his wife goes to the office and his daughter studies at school.

Oh’s friends called him a “disgrace to the male sex” and “a crazy guy with no male self-esteem.” His in-laws weren’t very supportive, either. They considered him a “bum who does nothing at home, living off his wife."
JEJU ― Oh Sung-geun wakes up at 6 a.m., heads to the kitchen and makes breakfast for his wife and daughter, a morning ritual he has been performing for the last eight years. Meanwhile, his wife, Lee Jung-hee, readies herself for work. She’s the one who brings home the bacon, and it’s Oh’s job to cook it.
Oh, 42, has swapped his tie and briefcase for an apron and a shopping basket, and he jauntily introduces himself with a namecard that proudly defines his postmodern role: “Full-time househusband.” His 8-year-old daughter, Da-hyang, proudly calls her stay-at-home dad “the chef of the house.”
Last Monday morning, even before sunrise, Oh was busy grilling mackerel, a choice for breakfast that he prepared after careful consideration at the supermarket. “See how plump and nutritious that mackerel is,” Oh said. Then he tasted the mussel soup that was simmering on the gas range. Da-hyang had a touch of the sniffles and the soup was Oh’s remedy. The rice was a healthy mix of grains and tiny anchovies, tossed in curry powder.
Oh quit his job as a consultant for Oriental medicine clinics in 1999 after Da-hyang was born. His wife declared that she didn’t want to give up her job in local government, and Oh didn’t object. The problem was baby care. The couple had been dreaming of having a child for many years and after reading up on kids and parenting, Oh knew that the first three years of a baby’s life are vital in helping to form personality and potential. After a great deal of thought, Oh made a momentous decision. He quit full-time work and immersed himself in diapers and baby formula to become a professional housedad. 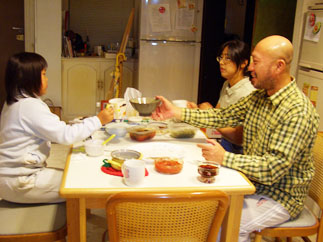 All photographs by Chun Su-jin

Many married couples in a similar situation simply hand the newborn over to grandma and granddad. But not this family.
“Theories about raising kids have changed a great deal, and I wanted to bring up my baby daughter myself,” Oh said.
Oh and his family have no regrets about their decision to change gender roles, but they faced strong opposition from a society steeped in the male-dominated Confucian culture. His friends called him a “disgrace to the male sex” and “a crazy guy with no male self-esteem.” His in-laws weren’t very supportive, either. They considered him a “bum who does nothing at home, living off his wife.”
But the social stigma has not turned Oh into a desperate househusband. He’s undaunted and outspoken. “I just let the criticism go,” Oh said with a shrug. “There’s no time to deal with the stares and the gossip. I don’t have time for that.”
His wife is firmly on his side. “We can’t be bothered to make other people understand. They have a fixed idea of gender roles and we can’t change the way people think.”
Oh said it’s hard for people to accept their alternative lifestyle. “They are free to criticize me, and I am free to ignore them. There’s nothing for me to be ashamed about. Housework is a formidable responsibility.”
Oh, though, is not alone. The National Statistical Office last week announced that the number of househusbands leapt from 106,000 in 2003 to 151,000 last year, an increase of 42.5 percent. About 5,000 out of this group were bringing up kids as well. 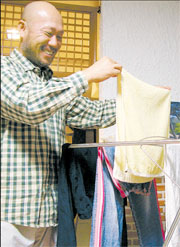 Oh is delighted with the swelling ranks of stay-at-home dads, but he remains cautious. More Ohs in the world doesn’t necessarily mean society is more understanding or less critical.
“The statistics say the numbers are on the increase, but I haven’t heard many guys introducing themselves as househusbands,” Oh said. “Sadly, many househusbands aren’t very proud about their role and try to hide their secret.”
Oh once tried to set up a “Househusband Club” with three others, but he had to scrap the plan when two of them quit on him. The burden of being known as a househusband proved too great, Oh said.
Not all househushands choose their role. Many have lost their jobs and stay at home doing the housework against their will. For this very reason, Hwang Jung-mee, a fellow at the Korean Women’s Development Institute, said recent statistics have to be interpreted conservatively.
But Ahn Lee-whan, a key professor at the Korean Institute for Gender Equality Promotion and Education, still reckons the increase in numbers is a sign that society is slowly changing and adopting a more flexible perception of gender roles.
“The notion of the fixed gender role from the past is collapsing,” Ahn said.
Meanwhile, Oh does not think he was born with a special gene or talent to be a househusband. As the eldest son in a strictly conservative family rich in Confucian values, Oh never had to step into the kitchen, and he never intended to take on this role. 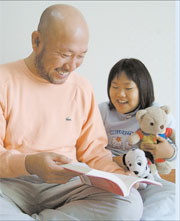 Oh’s friends called him a “disgrace to the male sex” and “a crazy guy with no male self-esteem.” His in-laws weren’t very supportive, either. They considered him a “bum who does nothing at home, living off his wife.”

On family picnics or trips to the theater, his dad used to walk a few steps in front of his mother, who would be carrying the baby and diaper bag, while holding on to Oh’s hand. That memory has long stayed with Oh, and he has spent a good deal of time questioning gender equality.
When Oh went to college in the 1980s, during Chun Doo Hwan’s military dictatorship, his dream was to make the world a place where everyone enjoyed an equal sense of freedom, happiness and affluence. His idealism led to the loss of sight in his right eye during a violent student demo, and he ended up aspiring to be a writer.
He met his wife, Lee Jung-hee, in a literature class. “I just had this gut feeling that we’d get married,” Oh said with a coy smile.
Their marriage is not the run-of-the-mill relationship you’ll see on many Korean TV dramas. Oh often finds himself nagging his wife to come home early for dinner and to take better care of Da-hyang.
Oh felt that another pressure came from seeing his friends make names for themselves as professors or politicians while he stayed home to boil diapers and burp the baby. “When I was sat at home sterilizing cloth diapers, I admit that I felt frustrated at times,” Oh said, pointing out that even though washing cloth diapers took time, they are more environmentally friendly. 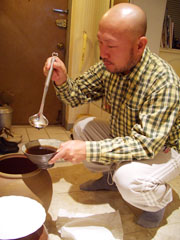 Oh Sung-geun is proud to be a househusband. By Chun Su-jin

“Housekeeping is an all-consuming job,” he said. “It’s never-ending and there aren’t any big rewards at the end of the day.” Oh admits that he got depressed at times, especially during the early years. Sometimes he even cried himself to sleep.
That depression was swept away when Da-hyang uttered her first word: “Daddy.” Since then, no matter how much his muscles ache at the end of the day from holding his daughter, all she need do is smile and Oh is happy.
“Whenever Da-hyang needs something, she always looks to daddy, not me,” Oh’s wife said. Da-hyang, who has grown into a sprightly and outspoken child, rather like her sturdy father, said, “I love everything about my daddy.”
Oh is now a talented, if rather fussy, all-round housekeeper. He can’t stand to see a single strand of hair on the floor and he nags his wife about leaving her stockings lying around.
He loves the crispness of towels that have been freshly dried in the sun, and his best way of relieving stress is chitchatting with housewives in his apartment complex. “We gossip for hours over coffee, complaining about our spouses,” he said.
Getting to know the housewives in his neighborhood wasn’t easy at first. When he first took Da-hyang to the local playground, the women would turn away, he said, behavior he classified as discrimination. His gender also meant he was refused entry to an aerobics class for mothers when he wanted to work on his aching muscles, a common problem for anyone looking after babies.

But what broke the ice was when Oh won a prize in a local competition for ideas to reduce garbage. Not long after, the other housewives were clamoring at his door.
Oh has used his experience as a househusband to write two books on housekeeping: “A Man Who Sets the Table Every Morning” and “Hello! Fathers Raising Children.”
One of his tips is a remedy for colds and lethargy. On the floor at home he has jars packed with mugwort that has been fermenting in brown sugar for five years.
“I can’t say I love housekeeping, but I enjoy it, especially when I see the happy faces of my wife and daughter,” Oh said.
Not surprisingly, Oh has received a series of awards for his wise thoughts on housekeeping. One of his many prizes was a family trip to Jeju Island. He fell in love with the island and his family moved there last year.
Winning competitions has brought its share of bad memories, too. Oh once placed third in a competition about housekeeping which was hosted by a company specializing in home utensils. He got a call later from that company saying he couldn’t receive the prize because he was a man.
Oh is determined to make sure that Da-hyang is brought up fully conversant with gender equality. He bought her all sorts of different toys, from robots to plastic swords to teddy bears. Da-hyang loves to play with her robot toy “Super Rising Dragon,” and she can’t get to sleep unless she has her teddy bear with her.
Boys in Da-hyang’s class once teased her, asking, “What are you? Man or woman?” Her answer shut them up. “Me? I’m Da-hyang!” she replied.
By raising such a high-spirited daughter, Oh is confident that there’s no such thing as maternal instinct. “I learned that what really matters is not our gender but our attitude toward the baby,” Oh said.
“What babies want is someone who loves them, and being a woman doesn’t necessarily mean that you’ll be a good housewife,” he said.
Ahn, from the Korean Institute for Gender Equality Promotion and Education, couldn’t agree more. “We are programmed to think that gender roles are fixed, but they are actually socially constructed notions.”
Hwang, from the Korean Women’s Development Institute, said, “The term ‘mothering’ might be more appropriate than ‘maternal instinct.’ Anyone, regardless of their sex, can play that role.”
Oh’s next plan is to write children’s stories about gender equality. But he refuses to label himself as a feminist.
“I’m a humanist and my dream is that everyone can be happy in this world just being themselves,” he said.