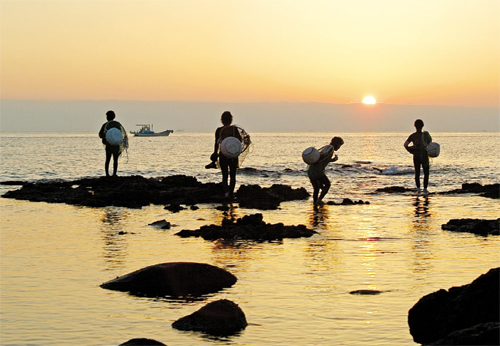 Women divers head home at sunset after diving for abalone and other shellfish. Provided by the Jeju Photography Club and the Jeju Haenyeo Museum

JEJU ― Kang Mi-saeng both loves and fears the texture of the seawater that seeps into her wetsuit.
Sometimes it feels soft and serene like a sleeping baby. At other times it is like a raging storm on the ocean.
Even though Kang, 52, has been diving for abalone and sea urchins for the past three decades, her sentiments remain the same.
All she can do is pray for safety, hold her breath and dive for the shellfish that she’ll later sell to buy food for her family.
After so many years working deep underwater, Kang suffers from headaches and earaches due to decompression sickness, which many long-term divers experience.
It’s the sea that gave her the condition, but it is also the sea that comforts her.
“My headaches vanish when I dive into the sea,” Kang said, her face tanned and deeply etched with wrinkles. “The sea is both my home and my mother,” she said.
Koreans call women divers like Kang haenyeo, the women of the sea.
When Kang submerges into her watery second home, she doesn’t need cutting-edge technology. Like those who dived before her, Kang faces the sea with nothing more than a simple wetsuit, fins and a face mask. In her hands she clutches the tools that she uses to gather shellfish, a buoy made from a gourd and a fishnet basket to carry her booty from the seabed. 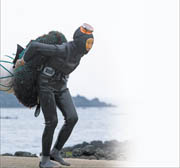 The women divers of Jeju Island are setting up a center to train more women in their field to keep the tradition alive. Provided by the Jeju Haenyeo Museum

And there’s no need for the oxygen tanks that divers usually carry on their backs. Kang can hold her breath for a remarkable 10 minutes when underwater.
Kang shrugs off questions about whether the work is too physically demanding. Thirty years ago the haenyeo only wore thin cotton wetsuits. The rubber wetsuit Kang wears would be considered a luxury now by the women divers who worked the Jeju waters before her.
It’s no wonder that Kang and her fellow haenyeo take great pride in continuing a tradition started by women divers of the past.
Choa Hae-gyung, who studied the haenyeo for her Ph.D., is equally in awe of the women divers and their incredible spirit.
“A haenyeo is the symbol of the tenacious character of Jeju women, and they are cultural assets that deserve protection,” Choa said.
Jeju Island has an old saying: “When you have a baby girl, butcher a pig and throw a party. When you have a baby boy, just kick him hard in the butt.”
Such a saying seems out of place in the male-dominated Confucian tradition. But it accurately reflects the importance of a woman as the backbone of the Jeju family.
Kang is worried, however. Women divers are the centuries-old jewel of Jeju Island, which lies off the southern coast of the Korean Peninsula. But they are becoming a rarity.
Kang is one of 5,000 women divers in 100 coastal villages on the island, and she is part of the younger generation, even though she is in her 50s.
“Young women are shunning the profession because it is too much like hard labor,” Choa said. “And now the haenyeo are aging.”
Kang is almost the youngest in her diving crew. Her best friend and diving buddy, Kim Haeng-ja, is 63, considered by experts to be at the best age for haenyeo-like diving.
Among the women divers still working, 34.5 percent are in their 70s, followed by 37.9 percent in their 60s, according to a recent survey conducted by the local government. Only 17.6 percent are in their 50s, and the numbers start to decrease in the lower age brackets. The 40-something women divers only make up 8.8 percent and the 30-somethings make up barely one percent.
The rapid aging of the haenyeo has motivated people in the village of Hallim to set up a training school for women divers and to open a center where tourists can experience what it’s like to dive like the haenyeo.
Ko Kyoung-dae, a Hallim village official, is in charge of the plan. He has been busy for months preparing the tourist center, which opens tomorrow. The school is due to open next spring and will run certificate programs that qualify women to dive as a haenyeo on Jeju Island.

Top to bottom: A woman diver in a traditional cotton wetsuit. By Seo Jae-cheol : A group of women divers end their work by gathering around a bonfire after a long day’s dive in the sea. Provided by the Jeju Photography Club and the Jeju Haenyeo Museum :Kim Haeng-ja and Kang Mi-saeng have been diving buddies for three decades.By Chun Su-jin

Ko hopes that the school will rekindle the tradition. So far the response has been positive. Ko is taking up to seven calls a day from interested applicants.
The programs will set a high standard. The job, after all, does not come without risk.
“Applicants should bear in mind that this diving job can mean risking your life,” Ko pointed out.
The tradition of women divers goes back more than a thousand years. Choa cites legends and folktales about a pearl diver who created Jeju Island that trace the tradition back into the mists of time.
Choa’s claims are backed up by several historical documents from the Three Kingdoms period, which lasted from the fourth to the seventh century. These documents refer to pearls and abalone being presented to kings by the Jeju divers and a ban on women divers swimming naked in the sea.
What Choa finds particularly intriguing is a record from 1694 that said only women could dive for pearls and abalone. The reason, according to a book titled “Jiyeongrok,” was the limited number of men on the island.
Indeed, Jeju has long been known as an island rich in wind, rocks and women. Choa added that the strict Confucian tradition back then would have been one reason for men to stay away from diving for pearls.
Kim, Kang’s diving buddy, thinks there’s another reason. “Men on this island are lazy,” she said.
Her outspoken comments have made some of the male villagers somewhat embarrassed, but Kim is undeterred.
“We women are different. We are not losers,” she said. “We cannot get by on what the men bring home.”
One of the male villagers, Im Myung-ho, tried to explain the men’s position. “It’s been a long tradition for Jeju men to take our boats further out to sea, and many died in the rough waves,” he said.
But Im had to admit that the Jeju women divers have long been the bulwark of the economy.
Going out to sea, however, doesn’t mean that the women get to share the housekeeping with the men. From cultivating the green onion fields to babysitting to cooking, housekeeping remained women’s work through the centuries.
Not surprisingly, on Jeju Island cradles used to be rocked by foot, allowing women to use their hands for other chores.
Interestingly, Kim and Kang never eat what they take from the sea. “I can’t eat what I risk my life to catch,” Kim said.
Meanwhile, Kang and Kim barely have time to complain. The winter season from November onwards means more top-quality shells, which she and her fellow divers export to Japan at a good price.
Winter means the sea temperature falls, although ice-cold water is not an issue for Kang. She’ll dive for four hours a day regardless of the cold. Until the director of her fishing community at Hallim flies a red flag to signal the end of the day’s dive, Kang and more than 50 other divers continue to dive.
During their breaks, the divers gather round and warm themselves in a room heated with a gas boiler. In the past, the divers used to gather around a bonfire, protected from the wind only by a low fence on the shore.
“When we dried our clothes, we sometimes saw the men and boys stealing a look at us,” Kim said with a faint smile.

These breaks are a good time to swap stories and gossip. “It’s the time when we complain about our husbands and boast about our children,” Kang said.
These bonding sessions are vital to the diving community, Choa noted. Every village has its share of territory and members of a village must stick to strict rules.
“For example, if a diver went out to sea by herself and made more money than the others, the community would ban her from diving for several months,” Choa said. “A community of women divers is more like a separate society with its own laws.”
Choa believes this strong bond between the women enabled them to confront Japanese colonial rule (1910 to 1945), especially in the early 1930s. Choa cited historical records about some 17,000 women divers who took up arms against the Japanese governor of the island after he manipulated the price of shellfish in 1931.

A woman diver hauls her catch back to the beach. Provided by the Jeju Haenyeo Museum

Kang and Kim grew up hearing stories about those heroic anti-Japanese protests.
“It was only natural for us to become divers,” Kim said. “The sea was just out there, and we were natural swimmers and divers.” Kim started diving when she was in her 30s, after having children.
“I couldn’t just stay at home as a housewife,” she said. “My elderly mother-in-law was already diving.”
Kang started in her early 20s, for no special reason. It was just a natural course that her life took.
However, neither Kang nor Kim asked their daughters to pursue the same work. They know the physical demands too well. But neither of them harbor any regrets about their lives spent searching for shells on the seafloor.
“I was born on this island, and it’s just my life to be drawn to the sea,” Kim said.
Then she pondered for a moment and said, “Maybe it would be good if I was born someplace other than Jeju in my next life.” With that, she and Kang burst into laughter.
And they went back to their routine, hoping for a bonanza of top-grade shells this winter.