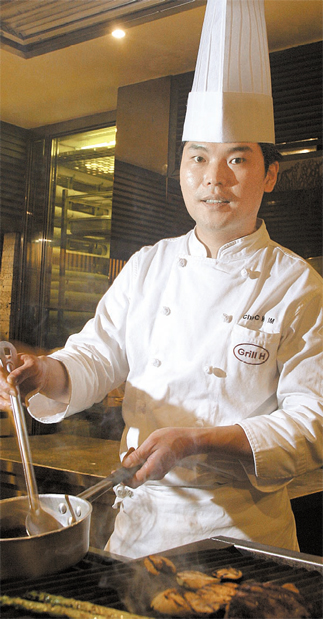 Lim Chul-ho is from the first generation of Korean chefs who went abroad to study Western cuisine and one of the first local chefs to make a career in Western cuisine out of love rather than a need for a regular paycheck.
Lim is now one of the leading chefs of Italian cuisine working in Korea, certified by critics and instructors from local culinary schools.
Previously, the idea of Western cuisine in Korea hardly met with a compelling level of professionalism. A few restaurants in fashionable neighborhoods south of the river were noted for presenting authentic Western meals, but it’s only recently that local diners have started to throw words like salami and Dom Perignon into everyday conversation.
The opening of a new restaurant is usually a sure indicator of changing trends. Pierre Gagnaire, a well-known French chef who has won three Michelin stars, will open a new diner in central Seoul. French food is clearly a cuisine to watch.
Lim, 35, now the head chef at Grill H, a fusion restaurant that offers Italian and Korean cuisine in Cheongdam-dong, south Seoul, has already witnessed many changes in the restaurant industry, despite his relative youth.
His first job was working at a Western restaurant shortly after he finished his military service. The house speciality was “hamburger steak,” a popular dish in the 1980s in Korea made from hamburger meat drenched in a thick gravy. That experience, coupled with the fact that Lim was raised in Pocheon, Gyeonggi, the home of galbi, or marinated Korean ribs, more than qualifies him to cook trendy nouvelle cuisine.
In 2004, Lim studied at the Italian Culinary Institute for Foreigners, a school located in a renovated castle in the small countryside town of Asti about half an hour east of Torino. At that time his taste in Western food was less fashionable than today. 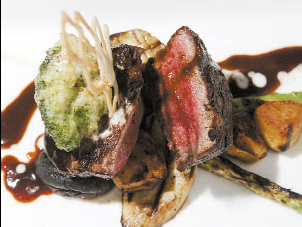 Before he ventured abroad, he’d reveled in traditionally-made carbonara, with fresh eggs and cheese covered in a thick cream sauce. In Italy, at a Florentine street stall, he tasted magical rivolita, a cheap Italian soup made from a vegetable stock with purple cabbage and borlotti beans, served on a traditional ceramic plate. Rivolita often made him homesick, reminding him of ugeoji-tang, a Korean soup made from dried radish stems.
Perhaps Lim’s first experiment in fusion food involved alcohol. After his classes in Asti, Lim and his classmates drank soju, bottles of which he took with him to Italy, with bruschetta.
“Lim has tremendous levels of energy and ambition,” says Park Sung-ju, the chief marketing officer at La Cuisine, a culinary school popular among younger Koreans. “He uses original recipes to develop a diverse range of tastes.”
One of his ambitious dishes is an Italian-style pumpkin cake baked with pine nuts and dates.
His other recipes, though, reflect his love of Korean-style Western cuisine, like the ground ginseng he adds to his steak sauce, a trademark topping at his restaurant.
His mixed background also gives him insight into the changing tastes of Korean diners today. He can usually tell what works and what doesn’t.
“Most Koreans aren’t that fond of strong herbs,” he says, “like the combination of cheese and rucola, for example.” Rucola is an Italian herb, also known as rocket.
But the most important part of local taste, he says, goes back to an element that’s undeniably Korean.
“If you are unsure,” Lim says, “you can’t beat an extra bit of spice.”