Hot stuff from a Spanish kitchen

Hot stuff from a Spanish kitchen 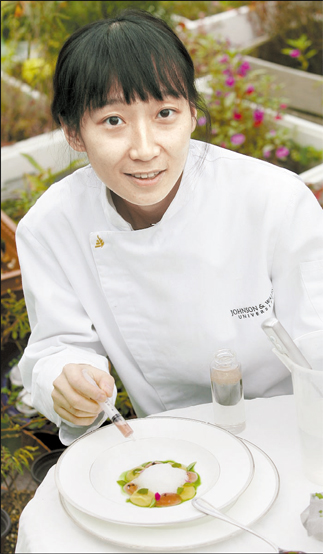 One image stays in the mind of Hwang Sun-jin from her days in Catalonia, Spain, as a junior chef at the world-famous restaurant, El Bulli. Two chefs are standing side by side on a kitchen counter, wiping sauce off a plate with cotton balls.
The chefs held up every plate under the kitchen lamp before the dishes were placed on the tables.
After all, this was a three-star Michelin restaurant, voted the best in the world by top food critics. But after working there for six months, Hwang decided to move on. In 2005, she quit and set up her own catering company back home.
“Working at El Bulli was frightening,” Hwang says. “The chefs there were never satisfied.”
We’re sitting in the kitchen inside Le Cordon Bleu, a local branch of the famed French culinary school.
Patrick Martin, a veteran French chef, is giving a special demonstration on his three-course specialty: Pan-fried sea bass with poached clams in pesto sauce as an appetizer, marinated duck breast with bean stew and spinach puree for an entree, and a Breton cake with caramelized apples for dessert.
Hwang is fresh out of her third year at the culinary school of Johnson and Wales University in the United States. In April, she’s joining El Bulli’s fiercest competitor, The Fat Duck, a Michelin-star restaurant in the town of Bray in England.
While in Spain, Hwang was struck by the intensity of the jealousy among the other chefs.
One her colleagues flatly told Hwang when she first arrived that she would end up washing meat bones for the rest of the year because her Spanish wasn’t fluent enough.
“People were so stressed out,” she says, as we wait for the Martin demonstration to begin. “We were overwhelmed with work. Before special events, we worked solidly for three days without sleep. There was always someone on drugs and crazy things going on. On one occasion I got shut in a refrigerator for half an hour.” 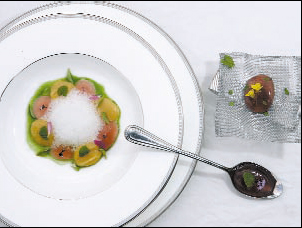 Apparently such stories are not uncommon in the cooking world. “Kitchen Confidential,” a memoir by veteran New York chef Tony Bourdain, delves into the culinary underworld of sex and drugs. One scene in the book relates how Bourdain saw one of the chefs where he was working having sex in the garbage areas with a bride in a wedding dress.
There was a wedding reception going on upstairs.
Back at the Martin master class, we taste the pan-fried sea bass at Martin’s workshop.
“Good stuff,” Hwang says with a nod of approval. “You don’t get this quality of French cuisine in Korea.”
Hwang says El Bulli is earning a world-class reputation ― there’s a two-year waiting list ― even though the restaurant is only open from April to September. It accommodates just 8,000 diners a season. An average meal costs 250 euros ($365).
After Martin’s seabass, we’re served honey-roasted duck with delicious spinach puree and tomato confit.
Then after the duck comes the dessert, a lush golden pastry edged with ice cream and steamed apples drowning in caramel sauce.
As we tuck in, Hwang talks about her recent jobs. She prepared the hors d’oeuvres for a Marc Jacobs launch. Her appetizers were shaped like the logo on the company’s purse buckle.
Hwang says that cooking at El Bulli was a different story. There the emphasis was on molecular cuisine, which is famous for presentation and style.
Dishes start as technical experiments. Some of Hwang’s tasks included testing edible chemicals or injecting flour dough into a needle to make ultra-thin pasta.
After the Martin demonstration, we set a date to meet again for the photo shoot. She’ll cook a dish from El Bulli ― a special gelatin solidified in calcium water that looks like caviar.
Suddenly she asks, “You’re not going to eat it, are you?”