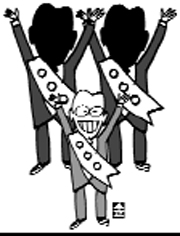 In the United States, the two-party system is firmly established, but sometimes a third candidate receives makes a difference in the election. Ralph Nader ran for president of the United States four times. The former Democrat, a political activist for human rights and the environment, earned 2.7 percent of the total, or 28.8 million votes, in the 2000 presidential election. That’s when Republican George W. Bush and Democrat Al Gore were competing fiercely. Because of Nader, Al Gore lost the election. The Democrats complained that Nader played the role of a spoiler.
The Republican Party had the same experience in the 1992 presidential election. George H.W. Bush, the senior Bush, ran for re-election but got sabotaged by Ross Perot, a millionaire from Texas.
Perot took votes that could have been for the Republican Party and earned 18.9 percent of the total, or 19,740,000 votes. Without Perot, Bill Clinton, then only 46 years old, might not have been elected president.
One month later, Korea had its presidential election. It, too, had its share of third candidates. When Kim Young-sam and Kim Dae-jung were competing fiercely, Chung Ju-yung and Park Chan-jong joined the race. With his power over the Hyundai Group and image as a successful businessman, Chung earned 16.1 percent, or 3,880,000 votes. Experts said he took more votes from Kim Young-sam than from Kim Dae-jung. Kim Young-sam earned 41.4 percent and Kim Dae-jung earned 33.4 percent. Kim Young-sam had earlier unified three political parties and built a firm support base.
Five years later, Kim Dae-jung embraced Kim Jong-pil for the presidential election. Thanks in part to a third candidate, Rhee In-jae, Kim Dae-jung was finally elected president on his fourth attempt.
Ted Halstead and Michael Lind maintain in their book that countless issues that have been produced in this era of information technology will shake up the established party politics and the election system.
As of Wednesday, 139 people had registered as presidential hopefuls at the National Election Commission. The field includes Lee Hoi-chang running as an independent.
Some 2,300 years ago, during the Warring States era of ancient China, the leaders of a small state convinced the lords of small states to protest against the Qin State, saying they would rather become the beak of a rooster rather than the tail of a bull. That still seems the case today. Many would rather be a leader than a subject.