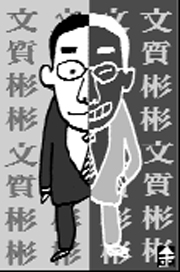 Some people pay too much attention to external factors and follow them, whereas others consider it more important to cultivate their own nature without formalities and express themselves as they are.
Confucius said we need to harmonize these two virtues of both internal and external appearances to achieve our goal of becoming learned.
External appearances are called mun, which literally means letters, or literature.
Inner appearances are called jil, which means quality. If harmony between the two is achieved, it is called munjil-binbin.
I Ching, which was written far ahead of Confucius’ time, dealt with similar concepts.
Since the Han Dynasty, these two concepts have been well developed and applied to theories on literature, surpassing the boundary of the discussion on people’s virtues.
Drawing on these two concepts, a piece of work with plenty of adjectives would be classified mun, whereas the other type of work, which pays attention to internal virtues, would be considered jil.
The Asian adherence to something fundamental or natural must have produced a large amount of vocabulary words rooted in the jil concept.
For example, ja-jil, which means personal capacity, uses the same Chinese character jil.
Lee Myung-bak, the presidential candidate of the main opposition Grand National Party, cannot hide his deficiencies in the aspects of ja-jil. The latest allegation about Lee is that he fabricated some documents to make it look like his son and daughter worked at his building management company to get them monthly salaries and evade taxes.
No doubt, this is a fatal flaw for a presidential candidate who wants to meet the public’s expectations, after winning the presidential race.
Such an act of deception seems frustrating to the general public, far more than other allegations, such as the BBK scandal ― claims he was involved in stock manipulation at the now-defunct investment firm ― and other accusations of malpractice. This scandal has not been handled properly. This might seem fortunate to Lee.
From the perspective of advanced politics, which places a high value on procedural matters, it is inevitably a fatal flaw.
If he ignores the law and only seeks profit, we need to take the ill effects of “President Lee Myung-bak” into serious consideration.