Farmers dry persimmons at a farm in Sangju.

SANGJU ― Pictures of persimmons drying are a defining image of the autumn harvest in Korea.
Every fall during the drying season, photographers and tourists swarm into Namjang Village, a neighborhood in Sangju City in North Gyeongsang, home to about 60 persimmon farms.
There’s one main road that runs through the village, and on either side there are farms and orchards where the persimmons grow.
During the fall, when the fruit is dried to make vitamin-rich snacks, the peeled persimmons can be seen throughout the village.
They stretch along the road in sheets of orange that perfectly match the autumnal colors of the surrounding countryside.
Strolling through the village you can catch the sweet scent of the peeled fruit blown on the wind, and you can’t escape a strange sense of nostalgia.
Sangju supplies about 60 percent of the nation’s persimmons, according to the city’s agricultural division. Over the years, the persimmon harvest has become a serious business, feeding the regional economy to the tune of 100 billion won ($109 million).
It’s not surprising that signs of prosperity abound. As you walk through this small village, past the lines of trees and the stretches of cabbage fields, you come across something unusual for the Korean countryside: plush black sedans parked outside farms.
Persimmons are big business.
City officials at Sangju are aware of the pulling power of their famed fruit. The city’s new mascot is a quirky cartoon character with a persimmon for a head.
Included in the mascot is a tiger from a famous Korean folktale. The story goes that a mother threatens to throw her bawling baby out of the house where a tiger is prowling.
The boy continues to screech, so his mother shouts “Gotgam, gotgam,” meaning dried persimmons. 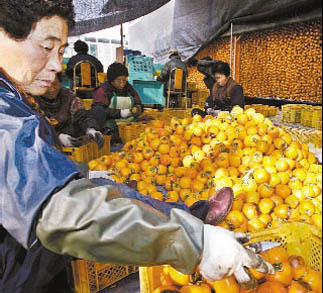 Workers in Sangju peel the skins off persimmons, above, and the city’s mascot.

The tiger, lurking outside, takes off, thinking dried persimmons are something scarier than tigers.
The mascot can be seen around persimmon country throughout the season, which lasts from now until mid-December. During this time, the persimmons are boxed and sold as traditional New Year’s gifts across the nation.
Keen to make the most of a good crop, Namchang is transformed from a sleepy countryside village into a bustling area of commerce. 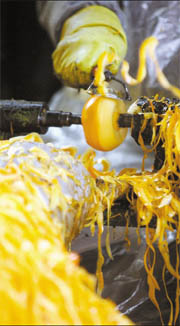 Villagers are so wrapped up in their work that they barely have time to offer free samples of persimmons.
The countryside mentality, which is noted for being generous and friendly in Korea, suddenly turns into a business mind-set in these parts.
That said, Namchang offers charming bucolic views during this photogenic season.
It’s easy to spot mounds of peeled persimmon skins stacked outside farms where they sit for months before being used to make persimmon vinegar.
As you walk around, you’ll also see fruit left on the higher branches, which the magpies will devour.
And by early December, white powder starts to form on the surface of drying persimmons, signaling that they are at their sweetest.
The persimmon tree is highly symbolic of the Korean countryside, like the maple leaves of Canada or apple orchards of England.
Dried persimmons are also incredibly versatile. They are not only a great snack, they are also used to make tea, and the peeled skins are fed to cows to soften the meat. Persimmon vinegar is applied to bug bites, and it is said that persimmon soup is very good for people with hearing impairments.
The fruit is also thought to help combat muscle pain, headaches, hemorrhoids, stuffy noses, indigestion, severe burns and even stomach cancer.
The road lined with the persimmon farms that runs through Namchang Village comes to a dead end at a small temple called Namjang.
The temple houses national treasures: a sitting Buddha made of iron and wooden Buddhist statues.
It is not one of Korea’s bigger temples, but it is a poetic way of signaling the end of the persimmon road.


The best way is get to Sangju in North Gyeongsang is to take a bus at Dong Seoul Bus Terminal or Gangnam Express Bus Terminal.
The first bus from Gangnam leaves at 7 a.m. and then leaves every 50 minutes. From Sangju Bus Terminal to Namjang village, it takes about 10 minutes by taxi.
For more information on persimmons, call the city’s culture tourism department at (054) 537 7208.