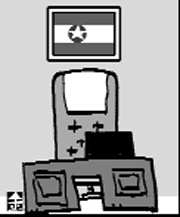 The prime minister of North Korea holds one of the top positions in the country’s hierarchy, officially fourth in political power.
Many believe, however, that the prime minister may actually be about 20th in actual influence, as there are plenty of hidden power elites in the political and army circles.
The post of prime minister in North Korea was created after the introduction of the state president in 1972. Since then, eight people have occupied the post. Among them, the person who impressed us the most was Yeon Hyung-muk, who held the job from 1988 to 1992.
The prime minister of North Korea faces tough and dangerous working conditions.
Kim Il Sung emphasized the significance of the post by insisting that the “prime minister is the general of the nation’s economy.” The prime minister, in turn, has often been made the scapegoat for the people’s discontent about the country’s struggling economy.
And to make a bad situation worse, the public economy always took a backseat to the military economy, which led to nuclear and missile development.
One after another, numerous ministers have stepped down in dishonor or suffered incurable illness.
After the dishonorable withdrawal of former Prime Minister Li Gun-mo (1986-1988), Li’s successor, Yeon Hyung-muk, was demoted after four years to the post of candidate member for the Political Bureau Presidium, or secretary of Jagangdo Provincial Party. In addition, Prime Minister Park Bong-ju was demoted last April to manager of a small-town company.
Since assuming the reins of government, Kim Jong-il has recruited people who know the economy well to the top posts.
However, he took a “military first” attitude whenever the cabinet, the Workers Party, and army were in discord over the issue of opening and reform.
In contrast, the president of the People’s Republic of China, Jiang Zemin, gave Zhu Rongji, premier of the state council, a carte blanche to decide every affair in public administration and the national economy.
For example, when rumors spread that the yuan would be further devalued, he consulted Zhu. At that time, Zhu’s nickname was “emperor of the Chinese economy.” China has shown great fidelity to the principle that the “prime minister is the general of the national economy.”
Come to think of it, South Korea has had 27 prime ministers since 1972, representing its own infidelity to the prime minister. Six of one, half a dozen of the other.