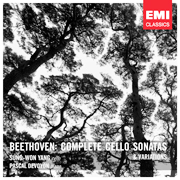 In many ways, Sung-won Yang’s discography hints of the unyielding pride of an orthodox cellist. Following his Bach cello suites in 2005, he has just released the complete Cello Sonatas of Beethoven, often dubbed “the New Statement of cello.” He is accompanied by Pascal Devoyon, a French pianist and Yang’s old friend.
With much refinement, the duo creates a terrific ensemble on this two-CD set. Perhaps much of its beauty stems from the rarity of Beethoven’s complete cello sonatas, noted for their complexity. Yang is the first Korean musician to release the ambitious repertoire. It’s also Beethoven we are talking about, the composer of five cello sonatas and three variations with the piano. He was the first and one of the few classical composers of cello sonatas, until Brahms came along at the end of the last century. Devoyon’s piano tends to overpower the lower notes of the cello at times, but the performance feels rich and warm throughout. As a plus, the album offers a variety of scores covering all phases of Beethoven’s career.