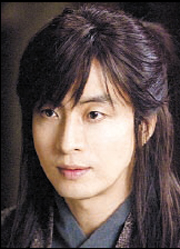 Japanese fans of hallyu, or the Korean wave, must be nibbling at their fingernails with worry.
Actor Bae Yong-joon, widely known in Japan by the honorific title Yonsama, was injured early this month while shooting the MBC TV drama “Taewang Sasingi (The Tale of the Great King and the Four Gods).”
Bae stars as the Great King Gwanggaeto of the Goguryeo Kingdom. While shooting the 17th episode, a stuntman fell 10 meters from a wire and landed on Bae, injuring the star’s neck and shoulder.
A doctor told Bae, 35, that the actor should receive medical treatment right away, but Bae declined because he didn’t want to delay the shooting schedule. Instead, he took painkillers every other day.
A statement from Forest Entertainment, Bae’s agency, said, “He [Bae] will have surgery after shooting wraps up.” That will be at the end of November. The last episode will air on Dec. 5.
This isn’t the first time Bae has been injured on a film set. Last month he fell off a horse during a fight scene, and he once cut his finger on a sword.
Taewang Sasingi attracted 31.6 percent of the viewers watching TV last Thursday, according to TNS Media Korea. By Lee Eun-joo