Lessons about life and death in ER special

Lessons about life and death in ER special 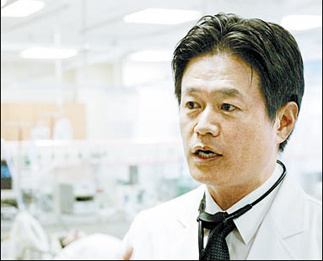 Dr. Hwang Sung-oh battles to bring back to life hearts that have stopped beating. [EBS-TV]

Crying like a baby was the last thing I expected to be doing last Saturday night. But there I was, half an hour before a much-anticipated date, weeping buckets.
This is what happened. I was just about to turn off the television when I caught the beginning of a show on EBS-TV called “Myeong-ui (Master Medical Doctors).” Within minutes I was hooked. For the next hour I was swept away by a tidal wave of emotion. I cried, I smiled, I laughed and I nodded in sympathy with the dramas that the people on this exceptional program were experiencing.
I watched until my poor boyfriend, shivering outside in the cold, called to tell me I was late for our date.
I felt guilty for standing him up for a mere television show. But I admit that I’d do it again. This show deserved attention.
It’s a weekly documentary about doctors, and last week featured Dr. Hwang Sung-oh, a specialist in emergency medical care at a general hospital in Wonju City, Gangwon.
The camera follows Dr. Hwang, a specialist in cardiopulmonary resuscitation ― which means getting a stopped heart to beat again ― and his junior doctors as they work the emergency rooms, or ERs, around the clock.
ERs are popular settings for television shows, but this documentary was different. It delivered a special, raw kind of emotion, even without the presence of George Clooney, former star of the hugely successful American show “ER.”
Dr. Hwang succeeds in saving only 3 percent of those patients whose hearts have stopped.
Bringing people back from the brink of death is one of the toughest jobs in medicine. But Dr. Hwang said, in a shy but articulate voice, that such a low rate meant he should work harder.
The program was gutsy, not shying away from showing death. The most dramatic scene was when Dr. Hwang tried, and failed, to revive a patient whose chest had been crushed in an accident at a construction site.
The unobtrusive camera focused on the reactions, and showed a tense Dr. Hwang pursing his lips.
“I’m not sure whether I should have the power to judge whether life has gone or not,” Dr. Hwang said, as he signed the death certificate. “Please don’t call me a master medical doctor. I am a bad doctor who cannot save the lives of all my patients.”
At this point, Dr. Hwang to me was a more attractive proposition than Clooney.
My sister is a doctor and she has told me plenty of tales from the front line, including stories of stabbed gangsters wreaking havoc in the ER and a father whose son nearly bled to death after a fight over inheritance money.
So I thought I knew about hospitals and emergency care. But I was not immune to the emotional shock from the stories in this program and the heroic way Dr. Hwang and his team battles to keep others alive.
At one point, I burst into tears like a lost child in a crowd.
Maybe my eyes welled up because the show reminded me of a recent loss. At 40, a friend, a designer and scholar, died earlier this year from liver cancer.
We used to meet up with a gang of friends and sing and drink through the night, discussing everything about life.
But then he suddenly dropped off the social radar, and we didn’t know why. I didn’t realize until the night before he died that this was his way of saying goodbye. He wanted his friends to remember him as he was, before he got sick, his family said.
All I could do was pray that he would rest in peace. Nothing is more precious than life.
That’s what I felt as I watched Dr. Hwang continue his struggle, trying to defy the odds and bring the dead back to life.
Master Medical Doctors airs at 10:50 p.m. on Thursday nights, followed by reruns on Saturday at 6:50 p.m.