An ambitious but bland ‘Evening’

An ambitious but bland ‘Evening’ 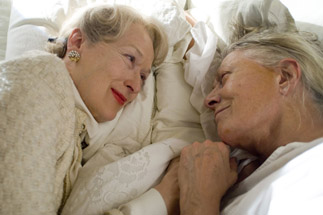 “Evening” is an ambitious film. One can tell that much from the trailer, which like so many others marches on at a stately pace announcing one star after another.
It’s concerned with life, death, love, unsatisfied desires. It’s supposed to impress on us the private, personal nature of life ― that each experience is something only you can own. And it tries to develop these themes for two generations of men and women, with six or seven main characters in all.
But no matter how well it may have worked in Susan Minot’s book, this is simply too much for two hours to handle.
Ann Grant (Vanessa Redgrave) is an old ex-singer on her deathbed, and her two adult daughters, the older Connie (Natasha Richardson) married and settled with two kids of her own, and the free-spirited younger Nina (Toni Collette) still concealing her pregnancy from her boyfriend, have come to be by her side. The title refers both to the twilight of Ann’s years and to the day of her life that is now playing itself back in her delirious mind as she lay dying.
In her mind’s eye, Ann sees her younger self (Claire Danes) on the New England coast for the wedding of her friend Lila (Mamie Gummer) to a man she does not love. But even as Ann comforts her friend, she falls for the man Lila is really after (and who has already rejected her), Harris (Patrick Wilson). Of course, Lila’s fun-loving but troubled little brother Buddy (Hugh Dancy) is head-over-heels for Ann. Since he is devoted to Harris too, things don't end well for him. And Glenn Close plays Lila’s mother. When was the last time she had more than a silly and/or walk-on role?
It’s all very Jane Austen with a modern American sexual ethos, and none of it is very new or exciting. Most of the actors in the flashbacks give self-absorbed performances, and since none of it seems to matter much to them, it’s hard to see why we should care. The exception is Dancy, who truly seems to understand his character’s desperation and pulls all eyes whenever he’s on the screen. In fact, it’s hard to understand why Ann’s so intent on cutting his heart out for Harris, who seems frankly too boring and vanilla for everyone in the film to be getting so worked up about him. His big romantic device (to point out stars for different moments) is shamelessly stolen from Buddy, and at one point when Ann tells him she’ll never be a famous singer, he replies, “You’re famous to me.” Do women really go for this stuff? Maybe the filmmaker means to suggest the fairer sex has simply gottten wiser (or cynical and jaded) over the last 50 years.
It’s a bad sign when the best scene in your movie starts around the 90-minute mark, but that’s precisely what happens here, with an older Lila (Meryl Streep) returning to comfort Ann in her last moments, tenderly lying down next to her old friend, with all bygones finally bygones.
At least Evening does not patronize its fading protagonist. Because we are inside Ann’s head, the words she says in between her dreams, which seem so random and worrisome to her daughters, appear perfectly natural to us. It is Ann’s daughters who are too caught up with the world to understand what their mother is trying to tell them. This respect for the elderly we could use more of, in the movies and in reality.
And the switches between the flashbacks and the present are smooth.
One could be forgiven for not realizing the relationship between Richardson and Redgrave, but when Streep steps on the screen the resemblence between her and her daughter Mamie is unmistakable. The pursed lips, the stiff posture, the little smirk ― it’s that rare case when we don’t need to be told who the “older” version of a character is ― and that has as much to do with the ladies’ attention to detail in their acting as with genes.
In the end, Evening is a light drama with bright, crisp, perfect colors, with choreographed moths and digital fireflies for mood. It sounds odd to call a film about death “light,” but despite a few powerful moments, there are simply too many characters and too much cliche, and what should have struck with momentous impact instead simply floats away.