Bukchon: A living museum for traditional Korean arts and crafts

Bukchon: A living museum for traditional Korean arts and crafts

Bukchon is often dubbed the Montmartre of Seoul. The neighborhood, about 10 minutes’ walk from Insa-dong, has most of the city’s major historic landmarks nearby, such as palaces, museums and exotic-looking hanok, or traditional Korean houses. But most importantly, the area reflects the old spirit of Seoul, which increasingly houses the studios and homes of traditional Korean artists. They offer hands-on classes both privately in their studios and through open sessions at the Bukchon Cultural Center (02-3707-8388). You can learn everything from ways to make traditional natural dyes to recipes for Korean rice wine.

Im So-hyeon has been making traditional Korean dolls for 18 years. Her studio is called “Diary of Old Dolls,” and Im has made up stories for each of the handmade dolls. She makes them using traditional techniques that date back to the Joseon Dynasty. If you wish to see the dolls, you can make an advance booking at (02) 722-2527.

The Hanok Cultural Institute (02-741-7441) teaches students how to build a hanok, a traditional Korean house. There are practical workshops, lectures and field trips across the nation. In January, the institute holds an intensive two-month course, followed by a unique program that focuses on refurbishing a modern apartment as a hanok. The institute is run by Shin Young-hun, a master carpenter who designed a Korean gallery for the British Museum and directed major historical renovation projects here, including Namdaemun, the city’s south gate, and Seokguram, a temple cave in Gyeongju.

HanSangsu Embroidery Museum (02-744-1545), which opened in Bukchon in 2005, offers classes on jasu, or traditional embroidery, for small groups. Courses run for three months for 300,000 won with materials and tools provided by the museum. English instruction is available.

Sky, Water, Light (02-739-6352) is a joint studio run by Luke Hong, an artist specializing in traditional dyes, and his mother Cho Su-hyeon, an expert in traditional knots, or maedeup. The lessons in dyeing include harvesting the plants grown in Hong’s backyard to crushing the oyster shells used to prepare the traditional dye bath. Cho, who has been designated as an Intangible Cultural Asset, uses naturally dyed string in her classes for small items like purses and accessories. The courses last three months and cost 100,000 won ($107). The beginners’ class for natural dyes runs for four weeks for 150,000 won.

Ol-Mul (02-738-2154) is a tea shop and a studio where Kim Hyun-suk teaches dado (“the way of tea”) classes in a traditional hanok setting. It teaches you the complete etiquette for serving and drinking tea in Korea. English classes are available for 50,000 won.

Kwon Moo-suk, a bowmaker who was designated an Intangible Cultural Asset by the Seoul city government in 2000, shows how to use buffalo horn and bamboo to make longbows and teaches the rich history of archery in Korea, a sport at which Koreans excel in international competition. A key focus is how archery was used to cultivate Confucian values. Classes are available in English. For details, call (02) 993-8116.

Gahoe Museum (02-740-0466), which specializes in minhwa, or Korean folk painting, holds hands-on sessions for fan painting, printing on T-shirts and making amulets. Currently on show are a range of animal bones, rocks, wood carvings and clam shells that are engraved with amulets.

Over 6,000 Korean works, including Sakyamuni’s “Sermon on the Mount Grdhrakuta (The Vulture Peak)” that dates back to 1741, are housed in the Museum of Buddhist Art (02-766-6000). The museum holds children’s classes on painting Buddhist subjects such as lotus flowers and murals from the Goguryeo Dynasty.

Classes at the Royal Cuisine Institute (02-3673-1122) are divided into two programs: Korean royal cuisine and food for paebaek, or traditional Korean weddings. The two-week intensive royal cuisine course takes place near the end of January and costs 960,000 won. The institute is run by Hwang Hae-Sung, designated Intangible Cultural Asset No. 38. She was taught by a former lady of the court who served Gojong (1863-1907) and his father Sunjong (1907-1910), the last two emperors of the Joseon Dynasty. 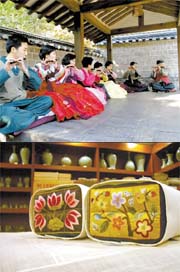 At the Bukchon Cultural Center (02 3707-8388) classes are held throughout the year. You can learn about folk paintings, the traditional Korean flute and different kinds of decorative arts. Many of the center’s instructors also offer private lessons outside of their classes. To get to the center, go to Anguk subway station on line 3 and take exit 2. Walk north for five minutes.
Folk Painting Known as minhwa, Korean folk painting usually reflects the moral values and mythical beliefs of ordinary people. But Kim J Boon (011-792-7334) specializes in royal ornaments of the genre with a focus on color and patterns. For expatriates, there are eight-week and sixteen-week courses available.
Traditional Needlework Kim Young-sun (010-3940-3888) has worked with expatriates’ wives in Korea for many years. She holds open classes at the center and private lessons in her studio in Insa-dong. A three-month course at the center costs 50,000 won, but she also runs private classes four times a week for 100,000 won.
Traditional Korean Drinks Nam Seon-hee specializes in making traditional Korean drinks, including pine wine and makkoli, the thick rice wine. During the winter, Nam shows how to make chrysanthemum wine. An all-inclusive three-month course is 120,000 won, and by the end of the course you’ll be drinking your own concoctions.
Etiquette and Tea Serving Seong Ui-sun runs a three-month etiquette and traditional tea serving class for 50,000 won. The program covers ways of bowing to parents, elders and at weddings and wearing traditional Korean clothes and shoes. Costumes are provided on request.
Korean Traditional Flute Kim Dae-po (017-285-1199), a traditional Korean flautist, teaches the sogeum, or small flute, and the daegeum, or large flute, at the center every Thursday. A three-month course costs 50,000 won with an additional cost of 10,000 won to purchase the sogeum. By the end of the course, students get to play simple Korean folk songs and Western songs, like “Lighthouse Keeper.”
Wrapping Cloth Called bojagi in Korean, cloth was used to wrap food in the days before Tupperware and plastic wrap. The method of sewing together bojagi is similar to quilting. The three- month course costs 50,000 won with separate costs for materials.
Calligraphy Traditional pen and ink classes that focus on different painting styles are held at the center. The course is 30,000 won for three months.
Korean Zither The center offers classes on the six-stringed geomungo, or zither, which was invented by the the musician Wang San-ak during the Goguryeo Kingdom in the seventh century. 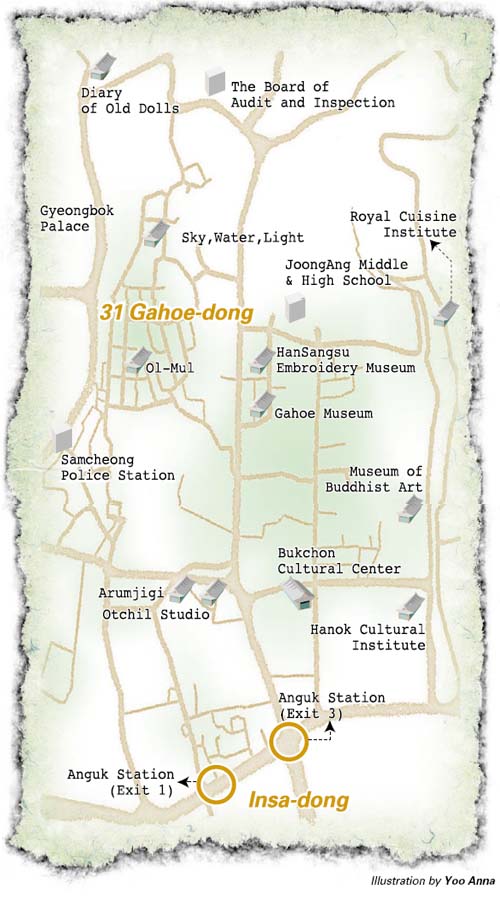