[Talk of the town]Wedding bells ring overtime on weekend

[Talk of the town]Wedding bells ring overtime on weekend 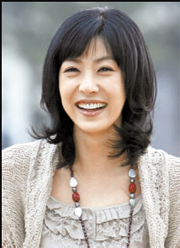 Love is in the air, or at least it seems that way after the slew of celebrity weddings this past weekend. The most high-profile exchange of vows was that of Sung Hyun-ah, 32, a model-turned actress, and Heo Eun-kyo, a businessman, this past Sunday at the Paradise Hotel in Busan. The two have dated since March. He apparently stole her heart through romantic text messages.
On the same day, comedian Kim Wan-ki, 28, also marched down the aisle. He married his first love, Min Kyung-seon at Jeonghyun Wedding Hall in Guro-gu, Seoul.
Other ceremonies took place on Saturday, too. Soccer star Kim Nam-il, 30, wed KBS TV announcer Kim Bo-min, 29, at the Grand Hyatt Seoul. They got engaged in June and immediately registered their marriage officially. Across town at the Imperial Palace Hotel in southern Seoul, Chung Kyung-ho, 27, a forward on the national football team, married Yang Hyun-joo, 28. Another footballer, Jang Hak-young, and actress Kim Ji-yeon tied the knot, too. Their ceremony took place at the nearby Ritz-Carlton in southern Seoul.
Well, one thing’s for sure: Their guests can kill two birds with one stone on wedding-cum-Christmas presents.