Saving a village home for Koreans in Japan

Saving a village home for Koreans in Japan 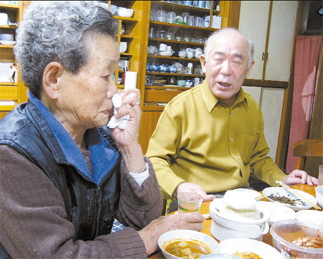 The threat of losing their homes was a “bolt out of the blue sky” to eldery residents of Utoro like Kim Gyo-il, right, and Kim Gun-ja. By Chun Su-jin

UTORO, Japan ― As you stroll through the streets of Utoro, about 30 minutes by subway from historic Kyoto, you could be forgiven for thinking that this was just a regular village. The residents smile and greet newcomers and the atmosphere seems cordial.
But then you catch sight of the signs daubed above the doorways and you think again.
“Absolutely against forced eviction,” “Allow tomorrow for the children of Utoro” and “Don’t take our home away” cry the signs in fierce, blood-red lettering.
These desperate slogans welcome visitors to 51 Utoro, Uji City, and the smiles of the Utoro villagers, many of whom are Korean-Japanese, mask a story that has shocked South Koreas and Japanese alike. Only now, after decades of struggle, are there signs of hope for the people who live here.
Utoro’s story is a tale of land, treachery, forced migration and big business collusion. Finally, it may also be about justice.
Ri Mu-yul, a leading activist for ethnic Koreans in Japan, has taken care of Utoro affairs since 2000.
“For the last two decades, people [in Utoro] have been worried about losing their homes,” he said, adding that the village had been a “battlefield” and that the fact that the villagers look like they have won their case is nothing less than a “miracle made possible by conscientious Japanese and South Korean citizens,” Ri said. But it took a long time for this miracle to take place.
The heart of the issue is the ownership of the land in Utoro. Most of the villagers are related to the many Koreans who came here to find work as laborers at a military airfield during World War II. When they arrived, they only had residential rights, and the issue of ownership after World War II was never a major one. 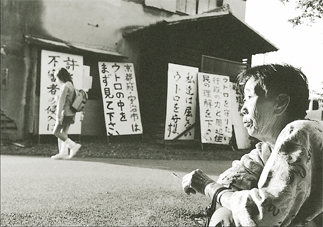 A first-generation Korean-Japanese woman smokes against a backdrop of signboards protesting the forced eviction of villagers. By Gwon Cheol. Provided by the International Solidarity to Protect Utoro group

The land, about 7.3 acres, used to be Japanese state property during the war, but after 1945, the United States military tried to make the village into a base. The villagers protested and won, Ri said. Then a Nissan-affiliated company acquired title to the land but residents continued to live here undisturbed, some saving up to buy their own homes.
But then a bombshell landed in 1989. Residents received written notice that they would be evicted. It turned out that the Nissan affiliate had sold the land, without any discussion with residents, and the new owner, Nishi Nihon Shokusan, a real estate company, had issued the eviction notice. It was “a bolt out of the blue sky” to residents like Kim Gyo-il and Kim Gun-ja, who have lived here since the early 1940s.
“Everything went dark at that moment,” recalled Kim Gyo-il, now 68.
However, there was one more shock to come.
Residents found out shortly after that one of their community, Heo Chang-gu, had been paid by the real estate company to pretend he was acting on behalf of the other villages and agreed to the sale.
Ri and the villagers said that Heo ran off with 145 million yen ($1.29 million), and he hasn’t been seen since.
As much as they wanted to catch Heo, enraged residents like the Kims had other things to worry about: They were about to lose their family homes.
The villagers quickly formed an action group and began their long struggle against eviction. The community filed a suit to stay on the land, only to lose a trial in 2000 to its owners.
In the process, the villagers found out that the Nissan affiliate had reported to the government that the Utoro land was an “empty lot,” a fabrication meant to facilitate the sale.
Eviction notices were issued one last time in July this year, but the villagers didn’t give up. They had too much to lose.
When the residents first arrived in Utoro in the early 1940s, they saw that it was no paradise.
“It was not a place for human beings to live,” said Kim Gun-ja, who moved to Utoro to look for a Korean husband in the early 1940s. At that time it was home to Korean laborers and more like “deserted land,” Kim said.
The dormitory cells were less than 16 square meters and there was no proper water supply or drainage. Kim had to go to the well to draw muddy water to make supper.

Villagers in traditional Korean clothes demand the right to continue to live in Utoro. Provided by the International Solidarity to Protect Utoro group.

Ri said that the drainage system has never been dealt with properly, which explains the odor from the small streams here and there in the village.
“About half of the villagers still have to use the wells,” Ri said.
After the war ended in 1945, residents built houses, but they left the old dormitory standing as a memorial to what they had suffered.
Most of the first-generation Korean-Japanese who lived in the village are dead now. They first went to Kyoto to find work and food, as Korea back then was a poverty-stricken Japanese colony.
“Japan has discriminated against Korean-Japanese for many years and this history is full of scars,” said Ri, who is also a leading member of a pro-North Korean group of Korean-Japanese people. “Utoro sums up all the issues that we’ve been through.”
He said some people try to belittle the Utoro issue, referring to it as a “disturbance of residents without ownership of the land.”
But Ri said it was a matter of historical significance. “The Utoro residents are Koreans who had no other choice but to come here and endure rough meals and a thin roof over their heads because of the colonial rule of the Japanese,” Ri said.
“It is a historical issue that should be settled now.”
Ri admits that money is the key to unlocking this dispute. Although he is a communist and thinks money should not be the main value of consideration, he said funds were needed to buy the land back and put an end to the decades-long struggle.
But the Japanese real estate company, Nishi Nihon Shokusan that now owns that land, set an absurd asking price of 1.4 billion yen, which was way above market value. The firm finally agreed in September this year to sell half of the land at 500 million yen. It was lower than the previous asking price, but it was still too much for the villagers alone.
But then the villagers’ luck turned. Some South Korean civil activists who had heard about Utoro started to raise funds after visiting the village in 2005. So far, they have collected 60 million yen from some 140,000 South Korean citizens, money that will be used to help finance the purchase of the land.
The United Nations Commission on Human Rights first voiced concerns in January 2006, and some Japanese citizens formed a civil rights group to protect Utoro.
The issue then began to attract government attention in South Korea. Ban Ki-moon, now the secretary-general of the United Nations, expressed his concerns about the Utoro issue in 2005 when he was serving as the South Korean foreign minister.
Then in November this year, the South Korean government pledged 3 billion won ($3.3 million) to the cause.
But Bae Deok-ho, the leader of the South Korea-based International Solidarity to Protect Utoro group, remains cautious. The South Korean National Assembly, in the furor before the presidential election next Wednesday, has yet to pass the budget bill.
“If the assembly does not pass the bill by Dec. 31, the deal could be invalidated,” Bae said.
The problem is the Japanese company signed the contract for selling half of the land on condition that the South Korean government honored its pledge of 3 billion won. 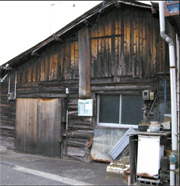 The old dormitory for Korean laborers at the Japanese airfield during World War II. By Chun Su-jin

The 60 million yen collected by the South Korean activists has already been used as a down payment, but nothing is fixed.
So, despite old age and infirmity, Utoro residents like Kim Gyo-il and Kim Gun-ja continue to protest their case. They have visited Seoul and other South Korean cities in a bid to raise awareness of the issue. They said they are encouraged by the positive response from the international community.
For Kim Gun-ja, the struggle is still highly emotional, and the support of the South Koreans has been especially important.
“I used to think there was no motherland for me,” said Kim, sitting at a dinner table at Kim Gyo-il’s house, her eyes reddening. “But now, I have a country to call my own, and I’m deeply grateful.”
“It’s been a hard, hard journey,” said Kim Gyo-il, taking a sip of Asahi beer and taking his friend’s hand.
He remains positive, despite the South Korean government’s delay in approving the funds.
Compared to what he and the other residents have been through over the years, waiting a couple more weeks for the South Korean National Assembly to make a decision is relatively painless.
A self-made man, Kim is now the owner of several construction-related companies. For years, he worked from 8 a.m. to 11 p.m. in different factories, from dyeing to construction to tea farms.
He still keeps a list of things to do at home, such as turning off the water while brushing his teeth. He learned these habits of frugality from his mother, who became the sole breadwinner after Kim’s father died in 1946.
Kim Gun-ja, meanwhile, has raised her children alone since her husband died, a man she has never stopped loving.
The two Kims are neighbors and sometimes eat dinner and drink together. Their dinner table on a recent Wednesday was filled with Korean-style crab soup, Japanese-style sashimi and an abundance of Asahi beer and Japanese sake.
Ri was at the dinner table, too, and he said he was delighted to see smiles return to the faces of people like the two Kims.
“Thanks to the support from South Korea, the villagers now have faith in the world,” Ri said.
Some villagers have even joked that they should change the angry signboards around the village to a warmer pink as opposed to the hostile red currently on display.

Kim Gun-ja, though, still bears a huge grudge against Japan. “I hate Japan. Japan should go to ruin if it fails to recognize its past wrongdoings,” she said.
Kim Gyo-il disagreed. “I don’t necessarily hate Japan,” he said, although he admits that he still gets mad thinking about the discrimination that he and his parents had to go through.
However, the struggle taught Kim Gyo-il that there are people out there who care, especially among Japanese citizens.
“It would have been impossible for us to fight all these years without their support,” he said.
To the delight of the villagers, the Japanese governement is also getting involved. The Ministry of Land, Infrastructure and Transportation, together with the Kyoto Prefecture government and the Uji City government, recently launched an organization to support the Utoro issue and to support village repair projects.
Kim Gun-ja said that she now had only one wish: to live in a new house on the land that the villagers purchase from the real estate firm. “I hope my wish comes true before I die,” she said, her eyes moistening again.