The island that pleased an African king

The island that pleased an African king 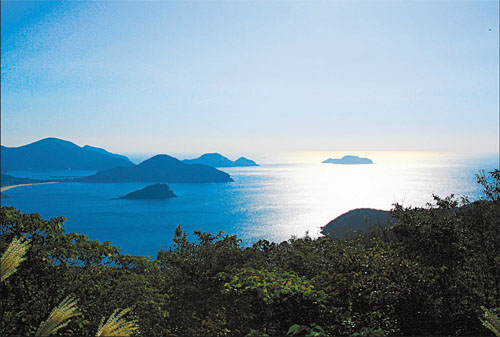 A view from Mangchi Hill on the “Way of the Emperor,”

GEOJE ISLAND, South Gyeongsang ― The views are fit for a king, and even for an emperor.
The late Ethiopian ruler Haile Selassie took a sidetrip to Geoje Island during a state visit to Korea in 1968.
Standing on Mangchi Hill, Selassie is said to have uttered a single word: “Wonderful!”
Apparently, Selassie, who is revered in the Rastafari movement that arose in Jamaica, cried out the same word seven times during his brief stay on the island, according to records about his trip.
The scenic coastal road that Selassie took during his sojourn on the island is known as the “Way of the Emperor.”
But the road betrays its name; all visitors are welcome, not just royalty.
However, the road does present majestic views. Two rocky islets, Naedo and Oedo, are of particular merit. The former means “inner” and the latter, “outer.” 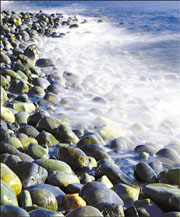 pebbles on Black Pearl Beach. All photographs by Lim Dong-hun

According to local legend, a woman transformed herself into rock and sand to escape a suitor bent on capturing her, so enchanted was he with her beauty.
The woman became the “inner” islet, and the man, the “outer.”
Selassie, who raised Ethiopian troops to support South Korea during the Korean War (1950 to 1953), ended his trip after descending Mangchi Hill and returned to Seoul via the Mangchi Three-way Junction. At 398 kilometers (247 miles), it is the longest road on any of the hundreds of Korean islands that skirt the coastline.
If you take a map of Korea, you can see that Geoje Island, located on the southeastern tip of the peninsula, is the nation’s second largest island. Jeju Island takes top honors in the size stakes.

The setting sun sets the skies on fire, as viewed from Mount Mang.

Geoje is connected to the mainland by a bridge, making it a relatively painless tourist destination to reach by car or bus.
If you take a right turn at the Mangchi Three-way Junction, you’ll find the “way” that Selassie didn’t take, a road that leads to Black Pearl (Heuk Jinju) Beach.
The name derives from the dark pebbles found along the shoreline. The pebbles and waves wash together to orchestrate a symphony of sound as the tides turn.
The evocative harmonies elude description. But no doubt Selassie would have declared his eighth “Wonderful!” had he reached this rocky bay.
After spending time poking around the rock pools and inspecting the pebbles, you can make your way to the town of Hongpo via a 3-kilometer long dirt track. The Geoje authorities chose to skip the asphalt to preserve the rustic flavor of the environment. So full marks to them, even if the road is a bit bumpy.
From this coastal route, you can reach Mount Mang, which offers stunning views over Somaemul Island and Daemaemul Island.
As I watched the fishing boats bobbing on the evening sea, the sky reddened with the glow of the setting sun. 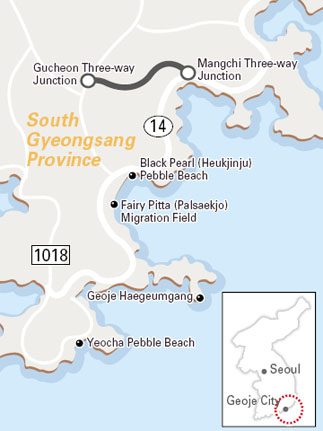 The experience was enough to make me feel like an emperor myself.
A bridge now connects the mainland to Geoje Island, symbolizing the steady urbanization of the Korean countryside. In fact, the number of people living on Geoje has expanded, while other Korean islands battle depopulation.
The 1997 financial crisis brought many workers to the island. They’d heard that “there is a way to feed your family on Geoje Island.”
The biggest employer is the shipbuilding industry. The majority of the 200,000 residents work in some capacity for either the Samsung or Daewoo shipyards.
Other sights of interest on Geoje include the site of a former POW camp which hosted some 170,000 North Korean and Chinese soldiers during the Korean War.
A museum and park have been built on the grounds, offering an exhibition of artifacts from that period and displays about the camp’s history.
For anyone nostalgic for the Korea of the 1970s, the Haegeumgang Theme Museum, (055) 632-0670, boasts retro displays of beauty salons, school classrooms and comic book rental shops.
The food situation is worth mentioning, too. The island speciality is meongge bibimbap (rice mixed with sea squirt and assorted vegetables).
The restaurant Baekmanseok, (055) 637-6660, comes recommended. This homely establishment offers slices of frozen sea squirt on hot rice, best eaten with sesame oil and gim (seaweed).

For more information, please call the Geoje City tourism office at (055) 639-3198. Lee Dong-il at the city tour office says that a brief introduction in English may be available.
To get to Geoje Island, go to Daejeon and then take the Daejeon-Tongyeong Highway. Drive to the end of the Tongyeong Interchange, and then take National Road No. 14 to the Geoje Bridge. From Seoul, the trip takes about four and a half hours.