SUVs at the trough

SUVs at the trough 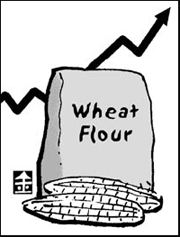 High, persistent and continuing rises in food prices are now posing problems around the world. The price of wheat exceeds $400 per ton. The price of rice is approaching its peak in 20 years, and corn prices have also doubled in just two years, standing close to its highest price in history.
The food-price index in the British economic weekly The Economist rose by one-third in just one year, and reached its highest point since its introduction in 1845.
The Economist warned that “the era of cheap food that lasted over the last 30 years is over,” saying that there is an increasing danger of “agflation” worldwide. Agflation, which mixes “agriculture” with “inflation,” is the newly coined term being tossed about lately to describe the recent form of inflation driven by the steep rise in food prices worldwide.
There are two reasons why the prices of crops have been skyrocketing in recent years. One is that Chinese and Indian people are getting wealthier. The consumption of edible grains is proportional to the growing population on the whole. The ratio has not seen many changes over the past few decades.
However, the ongoing economic boom in China and India has prompted the consumption of meat to mark a rapid increase.
In order to represent the heat value of the same calories, meat requires the production of much more crops compared to bread or rice. One kilogram of pork requires 3 kilograms, and the same amount of beef requires 8 kilograms of crops.
The other culprit is the bio-energy policy of the United States. Encouraged by the government’s support for ethanol, large quantities of edible and feed corns have been converted into fuel.
Additionally, land used for other crops such as rice or wheat are also given over to fields of corn. That is why other crops in stock are running short. The bio-energy policy of the U.S. is the direct fountainhead of agflation. The amount of ethanol we need to pour into the engine of a sport-utility vehicle is equivalent to the annual consumption of crops for an adult male.
The aftermath of agflation has been already making a rush toward dinner tables in Korea.
We cannot criticize the Chinese and Indian people for consuming more meat than ever before due to their wealth.
But it is my sincere hope that the bio-energy policy of the United States will be overhauled across the board, now that a considerable amount of crops is uselessly spent just for the purpose of transportation.