A portrait of an artist and his muse

A portrait of an artist and his muse 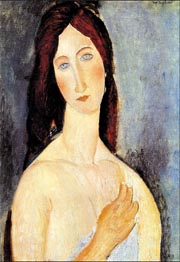 A portrait of Jeanne Hebuterne by Modigliani.

Much is known about the romance between the painter Amedeo Modigliani and his common-law wife Jeanne Hebuterne, but what is less known is that she was not just her husband’s muse but an aspiring painter herself.
Hebuterne killed herself two days after Modigliani died, but before her suicide, Hebuterne drew herself lying on the bed bleeding from her chest. She entitled the picture “The Suicide.”
She was eight months pregnant, but a world without Modigliani was meaningless.
Their relationship lies at the heart of an exhibition that opens today at the Goyang Aram Gallery.
Running through March 16, it displays some 150 paintings and personal belongings of this tragic couple.
The name Hebuterne may not sound familiar to many ears, but Modigliani’s portraits of her with bare shoulders, long neck and almond-shaped eyes are well known.
Modigliani had to scrap his dreams of becoming a sculptor because of his deteriorating health
Instead, he pursued a painting career because it required less physical strength.
He’s known for his nudes, yet he didn’t draw Hebuterne unclothed, although she had become his constant inspiration from the day they first met in the artist commune of Montparnasse in Paris in 1917.
So if it’s too much to travel to the Pere Lachaise cemetery in Paris to pay your respects, you can head to this exhibition where you will even find a lock of Hebuterne’s auburn hair.

In southern Seoul, meanwhile, an exhibition of another memorable artist, Russian Wassily Kandinsky, and other master artists from the same country, is taking place at the Hangaram Gallery of the Seoul Arts Center.
The exhibition, which runs through Feb. 27, features 91 oil paintings from 19th-century Realism to 20th-century avant-garde art.
The organizers say this exhibition is the first opportunity in Korea to gain a general perspective on Russian art.
In addition to the acclaimed abstracts of Kandinsky, the exhibition features the vivid war paintings of Vereschagin and the avant-garde work of Popov. 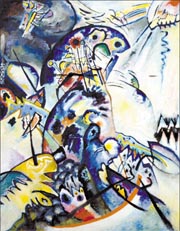 Kandinsky’s painting titled “The Blue Crest.” Provided by the galleries

For more information on the Modigliani exhibition, call the gallery at (031) 960-0112 or visit the Web site at www.2008modi.com (Korean only).
The Goyang Aram Gallery can be best reached from Jeongbalsan Station on subway line No. 3.
For the Kandinsky exhibition, call the gallery at (02) 588-8421 or visit www.2007kandinsky.com (Korean only).
The Hangaram Gallery inside the Seoul Arts Center can be best reached from Nambu Bus Terminal station on subway No. 3.
Take a brief taxi ride or a shuttle bus to the gallery.
Adult tickets cost 10,000 won ($10.64) for the Modigliani and 12,000 won for the Kandinsky exhibition.